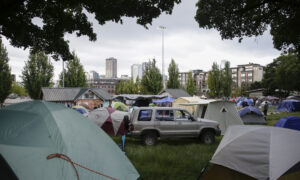 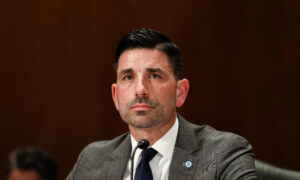 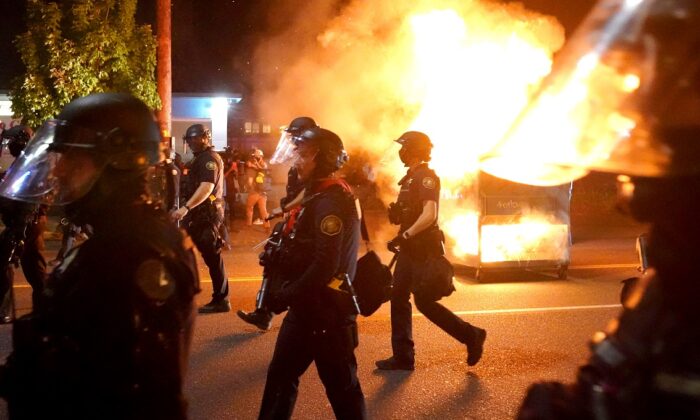 Portland police walk past a dumpster fire during a crowd dispersal in Portland, Ore., on Aug. 14, 2020. (Nathan Howard/Getty Images)
US News

“Under lenient leftist policies, insurrectionists around the country continue to pillage America’s communities. It’s past time we cracked down on their destructive actions. My legislation will incapacitate these rioters to prevent further destruction and increase their penalties, making the punishment fit their crimes,” said Cotton in a written statement.

Sparked by the killing of a black man, George Floyd, protests have flared across the United States since May, and while many protests have been peaceful, others have turned violent. Americans across the nation have seen their businesses destroyed, looted, and set on fire by anarchists and rioters.

Particularly notable has been the violence in Portland Oregon, Seattle Washington, New York City, and Washington.

Cotton and Loeffler have sponsored three bills to make sure that those who break laws by damaging public property and terrorize neighborhoods will be held accountable for their actions.

The No Catch-and-Release for Rioters Act would require a person charged with rioting be held by police until their trial unless evidence is there to suggest otherwise; The Rioting Restitution Act would create a federal, private, civil cause of action against rioters who meet the federal definition of rioting, allowing those injured to get treble damages and The Support Peaceful Protest Act would make federally-convicted rioters ineligible for pandemic relief unemployment benefits.

Loeffler’s local campaign event in August was disrupted by Black Lives Matter protestors, who tried to stop the event but the senator’s supporters held their ground.

The Georgia senator is a vocal Black Lives Matter critic who said the radical left creates chaos and pandemonium. She said the incident made clear the “stark contrast” voters have in November between order and chaos.

“Do they want the opportunity to have free expression, to have the rule of law, safety, and security in their communities? This is the type of legislation I have been introducing to help the president to make sure that we have a strong, safe economy,” Loeffler told Fox News.

Meanwhile, President Donald Trump signed a memorandum on Sept. 2 ordering a review of federal funds to certain state and local governments that “are permitting anarchy, violence, and destruction in American cities.”

The president’s memo orders all federal executive departments and agencies to submit a report to the director of the Office of Management and Budget (OMB) detailing all federal funds that have been provided to Seattle, Portland, New York City, and Washington, “or any components or instrumentalities of the foregoing jurisdictions.”

Within 14 days of the order, OMB Director Russ Vought must issue guidance to the federal agencies to submit their reports.

The order also said that Vought must, within 30 days of the order, issue guidance to federal agency heads on “restricting eligibility of or otherwise disfavoring … anarchist jurisdictions in the receipt of federal grants.”

It also directs Attorney General William Barr, alongside Chad Wolf, the acting Secretary of Homeland Security, and Vought, to publish on the website of the Justice Department a list of “anarchist jurisdictions,” described as “[s]tate and local jurisdictions that have permitted violence and the destruction of property to persist and have refused to undertake reasonable measures to counteract these criminal activities.”