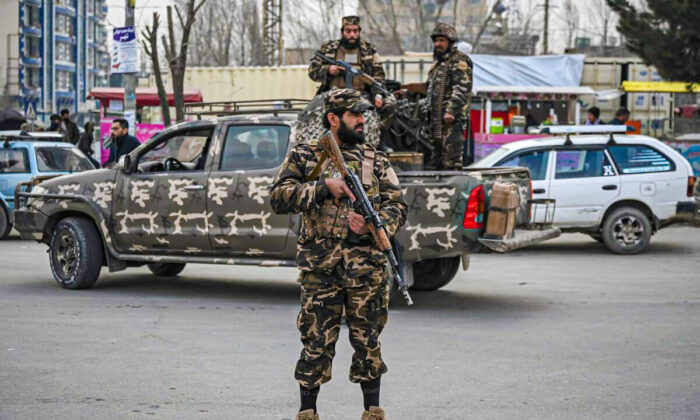 Taliban extremists stand guard during a demonstration by people to condemn a protest by the Afghan women's rights activists, in Kabul, on Jan. 21, 2022. (Mohd Rasfan/AFP via Getty Images)
Tech

Eight Republican senators are seeking answers from the Biden administration about the trove of biometric data that was reportedly captured by the Taliban when the U.S. withdrew from Afghanistan.

A letter to Secretary of State Antony Blinken and Secretary of Defense Lloyd Austin—which Sen. Marsha Blackburn (R-Tenn.) posted on her site on May 4—comes about four months after the Department of Defense (DOD) missed a deadline to produce a report on the estimated $85 billion in U.S. weaponry left in Afghanistan—including abandoned or destroyed biometric equipment or tools.

Blackburn and her colleagues are asking Blinken and Austin about reports from the nonprofit group Human Rights Watch, which has alleged that the Taliban is using U.S. biometric tools and data to hunt down its enemies.

“As the world focuses its attention to the Russian invasion of Ukraine, the Taliban is using this personal information to increase targeted killings, torture, and forced disappearances of Afghans who helped the United States.”

The senators asked Blinken and Austin whether the Human Rights Watch reports are true, as well as what policies the Pentagon had in place to safeguard sensitive biometric data.

“For example, where is such data stored and how is it disposed of in the event of mission changes or unintended transfers of control of the data?” they asked. “What future steps will the administration take to improve its data collection and retention policies to be sure this does not happen again in places where we are militarily involved?”

Neither the State Department nor the Pentagon responded to emails from The Epoch Times about the letter.

The New York-based group Human Rights First announced on Aug. 16, 2021, that Taliban fighters had captured U.S. surveillance tools. Those devices, known as Handheld Interagency Identity Detection Equipment (HIIDE), were used by soldiers to scan the biometrics of Afghans to match fingerprints on improvised explosive devices (IED) and for other such forensic investigations.

The warning corresponded with numerous reports of Afghans deleting their social media profiles. The U.S. Agency for International Development (USAID) reportedly circulated emails to its partners in Afghanistan, advising them to “remove photos and information that could make individuals or groups vulnerable.”

Maher, who worked with the Afghan biometrics program during his time as program manager of the Justice Center in Parwan, said at the time that HIIDE devices are password-protected. After a soldier uses the device and uploads the data to the central database, protocol says to wipe the device clean, according to Maher.

“Even if [Taliban] can get into that device, they’ll get an unclassified list of their own people,” said Maher, who has also used Afghan biometric evidence in the successful—though controversial—campaign to have President Donald Trump pardon a soldier convicted of killing civilians.

On the wider issue of the Taliban conducting surveillance operations to locate their enemies, Maher said last August that he thinks they would have to be aided by more sophisticated governments such as China or Iran.