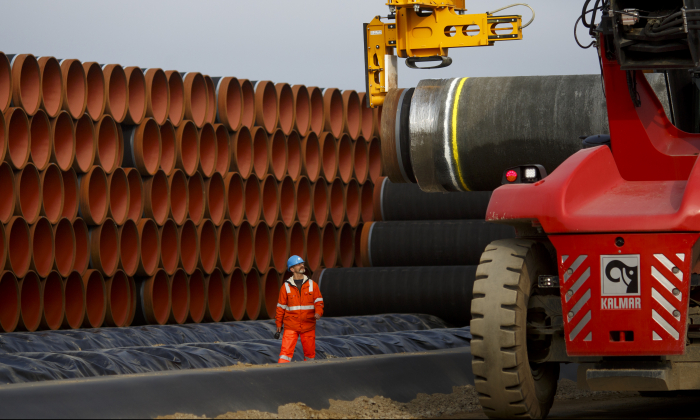 Pipes are loaded for stacking at the Nord Stream 2 facility at Mukran on Ruegen Islandon in Sassnitz, Germany, on Oct. 19, 2017. (Carsten Koall/Getty Images)
Trump Administration

Republican Senators Back Up Trump on Russia Pipeline

Trump made headlines at the NATO summit in Brussels by criticizing the pipeline—which runs from Russia near St. Petersburg, under the Baltic Sea to Germany—as a threat to Germany’s and Europe’s energy independence and security, and as undercutting Western sanctions of Russia.

The Energy Security Cooperation with Allied Partners in Europe Act, or the “ESCAPE Act,” authorizes mandatory sanctions on the development of Russian energy pipeline projects, such as Nord Stream 2.

The bill also encourages NATO members to work together for energy security; calls for a transatlantic U.S. government energy strategy; and requires the secretary of the Energy Department to expedite approval of natural gas exports to NATO members and any other country where exports would promote the security of the United States.

“The energy we produce is a direct relation to our national security,” said Daines in a statement on his website. “We must not only be energy independent but we must be energy dominant around the globe. The ESCAPE Act will take natural gas off the table for the Russians to use as a weapon to our allies. The United States is in a position to use American energy to our allies and we should do so.”

While Trump has gotten the lion’s share of the publicity—and criticism in American media—for his opposition to the pipeline, he is not alone.

The Ukrainians oppose it because it will deprive them of billions in revenue while making them less secure; the European Commission objects because the pipeline disrupts its plans for an energy union; and Denmark, Finland, and Sweden are concerned about the ecological implications of a natural gas pipeline at the bottom of the Baltic.

Twelve states across the Baltic and the Balkans formed the Three Seas Initiative, working to find an alternative to Nord Stream. Part of that alternative will be buying American liquid natural gas, another reason Trump opposes Nord Stream.