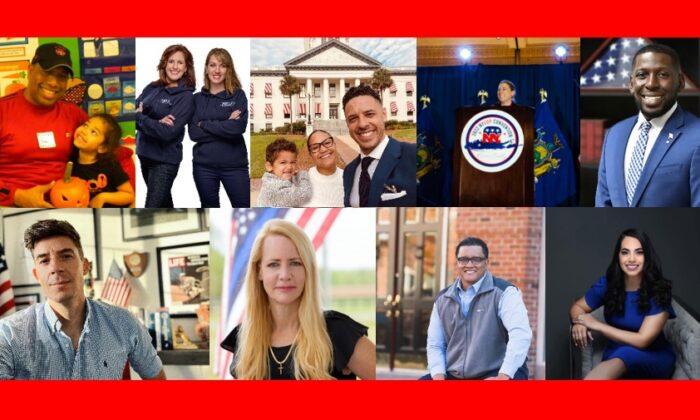 While the GOP has often been labeled by opponents as a fraternity of “old white men,” a new cohort of minorities, first-generation immigrants, and moms are bringing a fresh wave of diversity, youth, and a whole new perspective to the Republican Party.

But that landscape is shifting as young, tech-savvy people who gained success outside of the political arena prepare to bring a new perspective to Washington.

Another study (pdf) of the 2020 election cycle shows that while white men make up about 30 percent of the nation’s population, they make up 62 percent of America’s political officeholders, dominating both chambers of Congress and 42 state legislatures, as well as controlling a multitude of other statewide positions like governor, mayor, sheriff, and school superintendent.

By contrast, while women and minorities constitute 51 percent and 40 percent of the American population respectively, only 31 percent of women and 13 percent of minorities hold elected offices, and incumbents usually win their primary elections.

The Democrat Party had more candidates who were minority men and minority women, 17.6 percent and 14 percent, respectively.

All of that is beginning to change.

According to Axios, a record number of Republican Hispanics, 18 in all, are running for state House seats in New Mexico. In Texas, Hispanic women are set to dominate the Republican ballot.

The New York State Republican Party has a diverse lineup of young, political newcomers running for state offices as well as the U.S. Senate.

In an article for Newsweek, Jeff Charles—host of “A Fresh Perspective” podcast, co-host of the “Red + Black Show,” and contributor to Red State and Liberty Nation—wrote that “in the post-Trump era, it appears the GOP is beginning to embrace a new strategy, one that includes supporting minority and female candidates to appeal to a broader swath of voters.”

Charles told The Epoch Times that, considering the history of the Republican Party, he was a little skeptical when he first noticed the GOP’s campaign to reach out to black voters, citing how the effort has been “a little abysmal since the 60s.”

“But what we’re seeing now is more of a fresh and concerted effort to reach out to black voters and Latino voters as well,” he said. “The fact that we have a record number of black candidates running shows that the party just might be moving in the right direction. So I am cautiously optimistic about what we’re seeing. My only concern is that this might not be an ongoing concerted effort. One thing I always say when it comes to reaching black voters is, ‘It’s not a sprint, it’s a marathon.’ But if the Republican Party realizes that, they are going to see more gains over time.”

Charles also noted the record number of Hispanic Republican candidates, particularly in Texas where the population is predominantly Hispanic, saying “the way they are getting the votes is a sea change.”

“In this era, I think the Republican Party does seem serious about reaching out to minority voters, which is very encouraging,” Charles said, adding that adjusting to demographic change is necessary in order for the GOP to “stay relevant.”

According to Charles, now is the perfect opportunity for Republicans to take advantage of the current mood among black and Hispanic voters.

Recent reports show that, because of the extreme shift toward a communist and socialist-style of governance, Democrats are rapidly losing support among Hispanic and black voters.

“Hispanics and blacks are becoming disappointed and disillusioned with the Democrat Party,” Charles noted. “The Democrats have had their votes for decades and have done little to affect meaningful change. So I think this is also prompting a lot of what we’re seeing here.”

With the GOP poised to retake the House and possibly the Senate, Charles believes there will be a lot more black and Hispanic Republican lawmakers, at least within the House. This, he said, will begin to alter the very makeup of Congress, which has mostly seen Democrats with the larger number of minority members.

“If things go the way it seems like they’re going,” Charles predicted, “we’re going to see even more change over the next decade.”

The New Era of Republican Candidates

Daniel Foganholi is a first-generation American. His parents immigrated to America from Brazil with a dream of making a better life for their children. Foganholi is running for a seat as a city commissioner in Coral Springs, Florida, where he lives with his wife and 3-year-old son. They are expecting a daughter in October.

In a June 14 special election, Republican Mayra Flores flipped the majority-Hispanic 34th Congressional District in a historically blue region of South Texas by defeating leading Democrat candidate Dan Sanchez. Flores, who pulled 51 percent of the vote compared to Sanchez’s 43 percent, will be the first Mexican-born congresswoman and the first Republican to represent the district since 1870.

Willie Montague, an entrepreneur, author, and ordained pastor, is running to represent Florida’s 10th Congressional District. He is a pro-life black conservative who supports Second Amendment rights and legal immigration.

“Our nation is being set upside down by this current administration,” Montague told The Epoch Times, adding that the only hope of rectifying the problems is for a new generation of conservative leaders who are “for the people and come from the people” to step forward.

“They’re not career politicians or people that come in with hundreds of thousands of billions of dollars,” Montague clarified, explaining that Americans are looking for “everyday people” who have attended school board meetings and commissioner meetings.

Simi Bird was born to a single mother of seven children in “the ghetto” of East Oakland, California, prior to the passing of the Civil Rights Act.

According to Bird’s profile on the website for America First P.A.C.T. (Protecting America’s Constitution and Traditions)—a new conservative coalition he defined as a nascent “anti-squad”—victim behavior was “not tolerated” in his mother’s household “because Mrs. Bird wanted her children to become strong and resilient members of society.”

“What makes America great is our values, our diversity,” Bird told The Epoch Times. “To me, America is representative of all races, all nationalities, and all religions. Diversity gives us a different lens. It’s about unity.”

Terry Namkung, a candidate challenging the near 30-year Democrat incumbent Bobby Scott to represent Virginia’s 3rd District, is a black and Asian American who wants to challenge the establishment power structure that currently controls the Republican Party.

Namkung lives in Yorktown, Virginia, with his wife, Jasmine, and his two boys, Terrie and Ian. He has a doctorate in business and is a renewable energy expert.

Parents have been frustrated by forced masking policies, lockdowns, and social justice curriculum like critical race theory and transgender ideology being taught in their children’s schools to the detriment of traditional subjects such as math, English, and science.

As a result, moms across the country have been running for, and in many cases winning school board positions.

With 100,000 members across 195 chapters in 37 states, the strength of their numbers is making Mom’s for Liberty a growing political influence.

“If you guys run, you are going to make everybody else win,” Scott said during his remarks on July 16.

“So what you’re seeing is a whole new crop of first-time politicians running for office, and why not moms?” Justice asked rhetorically, adding “who belongs on a school board more than parents?”

“The interesting thing is this,” Justice explained. “In the past, we had people who were career politicians. They got elected to school boards because they wanted to have a career in politics. That’s not the case here with parents. A lot of them have jobs and careers. They’re running for school board because they really want to make a difference in their community.”

While Justice believes its a natural progression, that these school board moms will go on to become a new crop of conservative state and federal lawmakers, she also hopes they usher in a return to the original purpose of an elected official, that they served their community for a short time and then returned to their jobs, not seeking an office because they’re looking for a full-time, lifelong career.

On May 17, Villaverde defeated Mahesh Ganorkar and Adina Safta in the Republican primary for North Carolina’s 2nd Congressional District. She will face Democrat incumbent Deborah Ross in the general election on Nov. 8, 2022.

In the wake of the CCP (Chinese Communist Party) virus, and North Carolina Gov. Roy Cooper’s subsequent lockdowns, masking, and vaccine mandates, Villaverde saw a disconnect between Democrats in power and the people they were supposed to represent.

“Democrats were ignoring what the people wanted and that’s not what our government is supposed to do,” Villaverde told The Epoch Times. “Their primary responsibility is to ensure that we’re safe and secure and they’re failing on that part while mandating and imposing on our freedoms.”

Villaverde believes people are tired of representatives who are “sitting on a pedestal” and are so far removed from normal people and the struggles they go through.

“I’m the mom of three boys,” she said. “I get up every morning and make sure they eat. I clean my own toilets. I do my own laundry and cut my own grass. But that’s not what we see from the elites. They’re so far removed from how normal people have to decide putting off the electric bill because they have to buy school supplies. A lot of people are literally one catastrophe away from bankruptcy or losing their house and we’re not seeing any responsiveness to that in D.C. We’re just seeing these pet projects being pushed, the ‘I want’ things.’ They’re not concerned with the things people need to survive.”