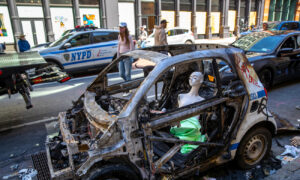 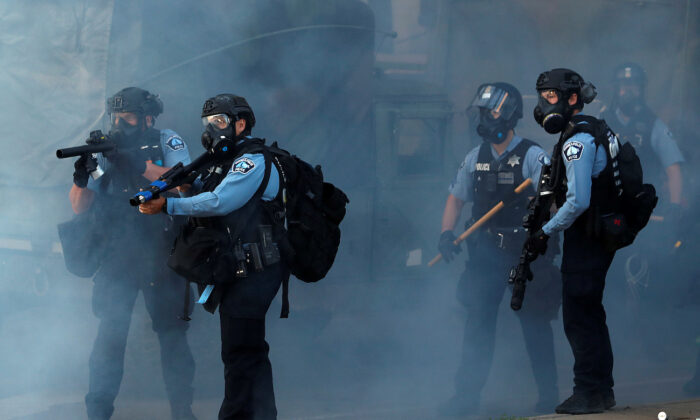 Police officers are seen during a protest against the death in Minneapolis police custody of African-American man George Floyd, in Minneapolis, Minn., on May 29, 2020. (Lucas Jackson/Reuters)
Politics

After the killing of George Floyd by Minneapolis police officers, Democrats began a campaign on Twitter to defund police departments. Although grassroots organizations and progressive politicians in some cities are calling for cutting funding to their police, Republican lawmakers are fiercely opposed.

“Any City or Entity that Abolishes Their Police Department: What effect do you believe this will have on economic development, tourism, and public safety? If you are looking for a good place to visit or state to do business, come to #SouthCarolina,” said Sen. Lindsey Graham (R-S.C.).

According to a 2016 survey done by the Cato Institute on the public’s attitude toward the police, the majority of Americans have a favorable view of the police in their community. It found that 81 percent of Republicans, 59 percent of Independents, and 59 percent of Democrats view police has necessary.

“We should get clear on something. Without the police, without law enforcement, without the fine men & women in blue, the Constitution is just words on a page. Rights require protection. Democracy requires the rule of law,” said Sen. Josh Hawley (R-Mo.).

The Cato survey found no group is “anti-cop,” even though African-American and Hispanics are more likely to have neutral feelings toward police officers.

Meanwhile, the far-left wing of the Democratic party, what President Trump has labeled the “Squad” are the ones that have been the most vocal about defunding and disbanding the police.

“The radical Left Democrats new theme is ‘Defund the Police.’ Remember that when you don’t want Crime, especially against you and your family. This is where Sleepy Joe is being dragged by the socialists. I am the complete opposite, more money for Law Enforcement!” said President Trump.

Rep. Ilhan Omar (D-Minn.), one of the members of the “Squad,” supports disbanding her city’s police department.

“The Minneapolis Police Department has proven themselves beyond reform. It’s time to disband them and reimagine public safety in Minneapolis. Thank you to @MplsWard13 for your leadership on this!” said Omar (D-Minn.).

However, the survey found more African Americans think the police are too quick to use excessive force, 73 percent, as opposed to whites, 35 percent, and Hispanics, 54 percent.

A Minneapolis City Council member for Ward 13, Steve Fletcher wrote in an opinion piece for Time Magazine, “Every member of the Minneapolis City Council has now expressed the need for dramatic structural change. I am one of many on the Council, including the Council President and the Chair of Public Safety, who are publicly supporting the call to disband our police department and start fresh with a community-oriented, non-violent public safety and outreach capacity.”

“Every police department violating people’s civil rights must be stripped of federal funding,” he wrote.