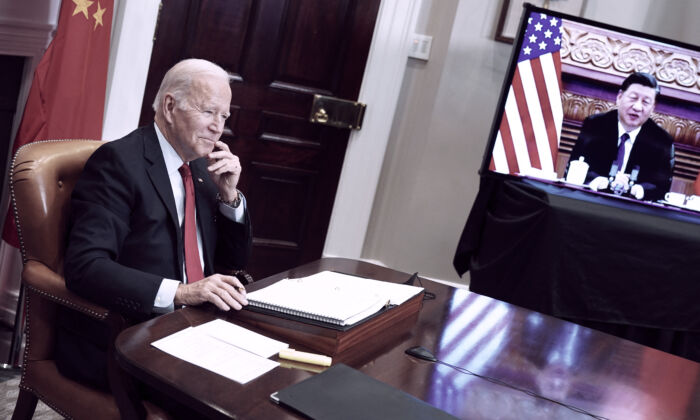 U.S. President Joe Biden meets with China's leader Xi Jinping during a virtual summit from the Roosevelt Room of the White House in Washington on Nov. 15, 2021. (Mandel Ngan/AFP via Getty Images)
US-China Relations

Biden Admin is Too Soft on China, Republican Lawmakers Say

During the call, which lasted two hours and 17 minutes, the two leaders exchanged views on a series of topics ranging from climate change, the Ukraine war, to Taiwan, according to senior U.S. administration officials.

Biden also talked to Xi about tariffs on more than $300 billion worth of Chinese goods imposed by former President Donald Trump, which Biden is currently considering lifting as part of efforts to rein in rampant inflation.

But a senior administration official said Biden didn’t share any potential steps he might take during the call. The president raised his “core concerns with China’s unfair economic practices, which harm American workers and harm American families,” the official said.

“Joe Biden and the Democrats are the best friends communist China has ever had,” the senator told NTD, the sister media of The Epoch Times.

“Every enemy of America is stronger today than they were,” Cruz said, referring to the Chinese regime and Russia, accusing the Democrats’ approaches of “weakness, appeasement, surrender.”

Thursday’s call is the fifth such conversation between Biden and Xi. White House officials said the conversation was “candid,” though they didn’t mention concrete progress on a spat of issues that have caused already-tensed Sino–U.S. ties to deteriorate to their lowest point in decades.

However, Senator Marco Rubio (R-Fla.) characterized the call itself as a signal of winning for the leader of the Chinese Communist Party (CCP) when he was facing problems at home.

“The phone call itself is a win for Xi, who is facing real political pressure in the lead up to the 20th Party Congress and rising discontent across the country,” Rubio said on Thursday.

The Chinese leader is seeking an unprecedented third five-year term in office during the Party gathering in autumn but his zero-COVID policy has posed new challenges.

The strict COVID control measures have brought Shanghai and other Chinese cities into repeat lockdowns, fueling public anger while slowing down the economy. The unemployment rate of youth hit a record high in the second quarter.

As the CCP leader comes under domestic pressure, the senator called on the Biden administration to harden its stance on Beijing.

“Xi Jinping is a tyrant, and President Biden should not give him the time of day,” Blackburn said on Twitter.

NTD contributed to the report.