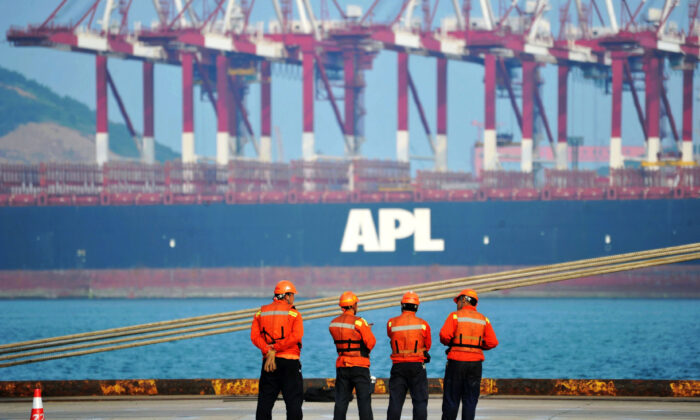 Workers stand near a container ship at the port in Qingdao, a city in eastern China's Shandong Province, on June 8, 2017. (STR/AFP via Getty Images)
Politics

Sixty House Republican lawmakers are seeking answers from President Joe Biden after Beijing failed to meet its buying targets under the “phase one” trade agreement with the United States.

“We urge you to take immediate steps to rectify the unbalanced agricultural trade relationship with China; work towards new enforceable commitments from China,” the lawmakers wrote.

“We are concerned that the lack of enforcement action will set a detrimental precedent for future trade negotiations,” they added.

The letter was made public by a press release from Rep. Dan Newhouse (R-Wash.), one of the signatories of the letter. Other signatories include House Minority leader Kevin McCarthy (R-Calif.), Reps. August Pfluger (R-Texas), Jim Banks (R-Ind.), and Ken Buck (R-Colo.).

In 2018, a “Section 301” investigation found that China was engaging in illegal trade practices, including excessive government subsidies and intellectual property theft, which subsequently prompted the Sino-U.S. trade war.

Last week, the Peterson Institute for International Economics (PIIE) published a report, concluding that China ended up buying only 57 percent of the U.S. exports it had promised to buy, totaling $288.8 billion worth of imports.

In January, U.S. Agriculture Secretary Tom Vilsack spoke about the $16 billion shortfalls in China’s agricultural purchases during a speech at the American Farm Bureau Convention.

Vilsack said U.S. trade representative Katherine Tai “continues to converse with China about the necessity of living up totally and completely to the phase one trade agreement, making up that $16 billion deficit over the course of the next several years.”

“We’re going to continue to press China on the need for complete enforcement and complete implementation of the trade agreement before we begin the process of discussing the possibility of extensions,” he added.

In February, U.S. Deputy Trade Representative Sarah Bianchi said it was “really clear” that the Chinese regime had not fulfilled its commitment to the trade deal. He added that “certainly we’re looking at all the tools we have in our toolbox to make sure they’re held accountable.”

“How will your administration report to Congress on areas in which China has fallen short of its obligations under the Phase One trade deal?” one of the questions says.

Another question asks, “Is your administration considering negotiations of a new fully enforceable deal that further levels the playing field with China to ensure China continues to purchase and import American agricultural goods?”

“Any solution must address the full suite of issues—including market access, administrative licensing, procurement, and localization—in a comprehensive and holistic manner. You must act now for America’s farmers, ranchers, and producers,” the letter says.