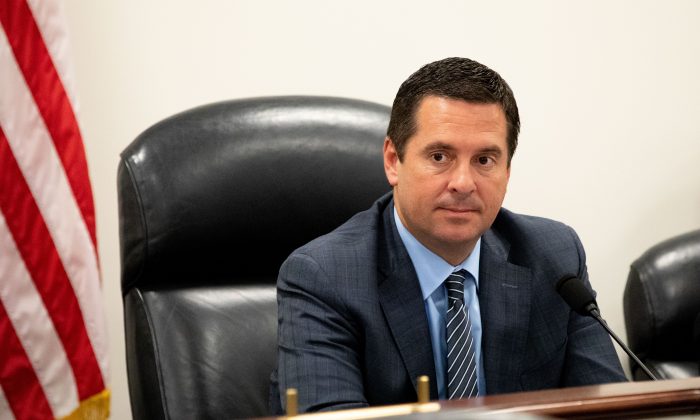 Rep. Devin Nunes (R-Calif.) said that Department of Justice officials involved in the sketchy Trump-Russia investigation should face consequences including jail time in order to keep the country from fracturing.

The situation that unfolded—a years-long investigation of President Donald Trump for alleged ties to Russia—ended up being an “obstruction of justice trap” that started without evidence, Nunes, the ranking member of the House Intelligence Committee, told the right-leaning Fox News.

The issue can only be fixed by putting the people who “perpetuated this hoax” in prison, the lawmaker said.

“These are all a bunch of dirty cops and I’ll tell you,” Nunes said, “we’re going to go down in a spiral in this country because you will not have a Republican that will trust the FBI or the Department of Justice for generations to come.”

Weissman is a former general counsel to the FBI when it was headed by Mueller who attended Hillary Clinton’s election night party.

In 2017, while the chief of the Department of Justice’s Criminal Fraud Section, Weissman set up a meeting (pdf) between the department and the FBI and reporters from The Associated Press. Officials at the meeting reportedly provided guidance to the reporters, who were investigating Paul Manafort, Trump’s former campaign chairman. Around two months later, Weissman was appointed to Mueller’s team.

Weissman displayed anti-Trump animus, including one email in which he wrote to former Acting Attorney General Sally Yates praising her for refusing to enforce Trump’s order banning travel from countries that failed to handle terrorism properly.

“I am so proud. And in awe. Thank you so much. All my deepest respects,” he wrote.

Nunes said authorities hid the meeting Weissman arranged with reporters, which was inappropriate, especially because Weissman received a briefing on the unsubstantiated dossier compiled by ex-British spy Christopher Steele.

He plans to ask Mueller whether he knew that Weissman was briefed in the summer of 2016.

Nunes said the investigation may have been started to lead to the impeachment of the president.

“What they were probably trying to get Trump to do was say something publicly, tweet something … probably their best dream was for him to fire Mueller … and then you’d have public sympathy and public support” for action against Trump, he said.

Attorney General William Barr said that investigations into the origin of the probe into Trump are ongoing, explaining in late May that he sought answers and found responses lacking.

“I had a lot of questions about what was going on. I assumed I’d get answers when I went in and I have not gotten answers that are well satisfactory, and in fact probably have more questions,” Barr told CBS. “Some of the facts that I’ve learned don’t hang together with the official explanations of what happened.”

“I think the activities were undertaken by a small group at the top which is one of the—probably one of the mistakes that has been made instead of running this as a normal bureau investigation or counterintelligence investigation,” he added.

Lawmakers have been pushing for Mueller to testify to clarify portions of his report, which his boss, Barr, said were unusual.

However, Mueller was slated to testify about the report on July 17. That scheduled date was pushed back one week, lawmakers announced on Friday, to allow lawmakers to question him for a longer period of time.

“We are pleased to announce that Special Counsel Mueller will provide additional public testimony when he appears before our committees,” Judiciary Chairman Jerrold Nadler (D-N.Y.) and Intelligence Chairman Adam Schiff (D-Calif.) said in a joint statement.

“At his request, we have agreed to postpone the hearing for one week, until July 24, at which time Mr. Mueller will appear in public before the House Judiciary Committee followed by the House Permanent Select Committee on Intelligence.”