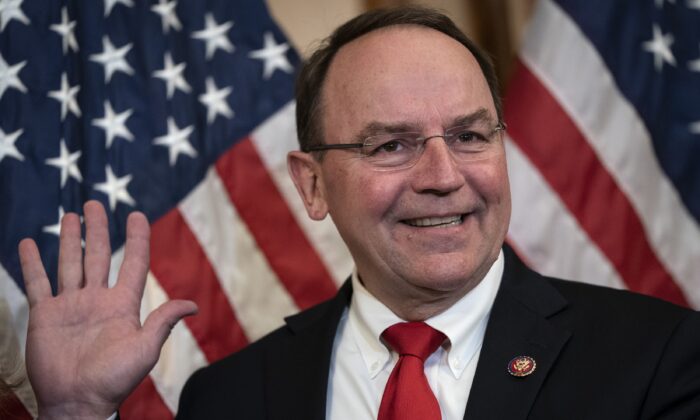 Rep. Tom Tiffany (R-Wis.), seen during his ceremonial swearing-in at the U.S. Capitol in Washington on May 19, 2020. (Drew Angerer/Getty Images)
Republicans

Congressman Tom Tiffany (R-Wis.) is pushing for a bill that would ban new visas for nationals in countries such as China that block deportations from the United States.

The bill, H.R. 8714, named the “Alien Criminal Expulsion Act” or “ACE Act,” would temporarily halt the issuance of immigrant and non-immigrant visas in “recalcitrant” countries. The bill was introduced on Aug. 25.

The ACE Act, according to its author, is a response to China’s retaliation against the United States for Speaker of the House Nancy Pelosi’s visit to Taiwan. However, it targets not just China, but “other countries that want to treat America as their dumping ground for criminal aliens. We will no longer accept visas from their countries under the ACE act,” Tiffany said. He talked about the new bill in an Aug. 30 interview with  “Capitol Report” on NTD, The Epoch Times’ sister media.

Following Pelosi’s trip last month, the Chinese regime announced it would suspend or terminate cooperation with the United States in eight areas, including repatriation of illegal immigrants.

China’s actions mean that it is “no longer going to accept criminal aliens from China, who are in the United States … back into China,” the congressman explained.

Tiffany said in a statement when introducing the bill, “It makes no sense to continue granting visas to citizens of Communist China, knowing that we may never be able to remove them should they overstay or commit crimes in our communities.”

The lawmaker cited an existing provision of the Immigration and Nationality Act known as Section 243(d), which stipulates that the Secretary of State “shall order consular officers … to discontinue granting immigrant visas or nonimmigrant visas” in any country that “denies or unreasonably delays accepting an alien who is a citizen, subject, national, or resident of that country.”

Based on that provision, Tiffany stressed that “President Joe Biden already has the authority to return those people and to stop any issuance of visas from China as a result of China’s actions.” The act, in his opinion, would push the Biden administration to “enforce the law that’s already on the books.”

The ACE Act signals Congress’ consistent support for Taiwan as well. Tiffany said he hopes the bill will get bipartisan support. If the current administration shows weakness in holding the regime accountable, Congress still needs to go ahead, he added.

“I believe it’s our duty to follow through, just as Congress has always been there to defend Taiwan since 1979, when Jimmy Carter made the terrible decision to not recognize Taiwan as a country.”

“America needs to stand strong, and we will prevail in the end. But America has to be strong,” the congressman said.