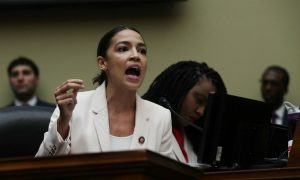 A projected elephant, the logo of the Republican party, in a Dec. 15, 2018 file photo. (L.E. Baskow/AFP/Getty Images)
Politics

A Republican Latina from the Midwest announced last week that she is running for Congress to take on the extreme elements in the Democratic Party. She says she wants to join a new generation of conservatives that will work to protect the freedoms that the Constitution outlines.

Catalina Lauf from Wood­stock, Illinois, is running against Democrat Rep. Lauren Underwood in Illinois’s 14th Congressional District, and, at 26 years old, is even younger than Rep. Alexandria Ocasio-Cortez.

Lauf, a former adviser to the Trump administration, announced her run in a campaign ad that aimed at identity politics propagated by various media outlets and the Democratic Party.

“My father is a small business owner who worked hard all of his life providing for his family,” Lauf says in the video. “My mother is a legal immigrant from Guatemala who worked hard to escape poverty, corruption, and war to find freedom and opportunity here in the United States of America.”

In her first interview, she sat down with the Daily Wire and expressed her wish to make a difference for the American people, and to fight back against far-left members of Congress who are, she says, trying to turn America into a socialist country.

When asked how she feels about illegal immigration and the situation at the border Lauf said that she agrees with President Trump that the loopholes in the system need to be fixed. Being the daughter of a legal immigrant, she said she understands the need to work hard and go through a legal citizenship process.

On the unsubstantiated claims by her opponent that President Trump is intentionally killing immigrant children in detention centers, she said: “I think it’s sad. It’s that type of rhetoric and grandstanding that has put a halt to any productive reforms.”

Lauf spoke about how her grandmother and mother immigrating to this country for a better life and working hard to achieve their goals gave her a foundation to understand the conservative values of hard work, freedom, and patriotism.

“The pillars [of the] Republican Party are centered on those ideas. The policies the party advocates open windows of opportunity for all Americans. Those values and those windows of opportunity made my life possible. Hispanic Americans across the country have similar stories. They work hard, value family, community, and freedom. They also believe in law and order.”

Lauf believes more Latinos will vote Republican if they understand what is at stake.

“Republicans support policies that will provide more windows of opportunity to us. Democrats offer false promises of socialism and limited possibilities. I’m running because I see what the far-left is doing—they’re threatening the promise of the American Dream. If they succeed, Americans like me will be limited in what we are able to accomplish in our lives. This is our future. This is our fight.”

She told the American people not to be fooled by socialist ideas. “We need to make it very clear to voters that the false promises of socialism come with a large price tag and they will be the ones who will foot the bill.”

“My focus will be on expanding our Tax Cuts and Jobs Act, finding ways to cut entitlement spending, and fostering a friendly economic environment, especially for our small businesses. Fixing our broken immigration system and ensuring Congress is supporting our president’s agenda of having safe and secure borders.”

She said she is clear that Americans need strong leaders who stand up for conservative values. “Far too often now you see politicians who sit in that seat and do just enough to get reelected. They compromise their beliefs too much, even if it risks pushing our country further away from our constitutional intent,” she said.

Lauf said she wants to counter the message given to minorities from the Democrats and help them understand how the Republican Party stands for all Americans.

“Minorities are going to be the majority of the population by 2044. It’s time we focus on uniting minorities to join our freedom message. That no matter where you come from, no matter what color your skin is, as citizens of the United States, we are all Americans first.”