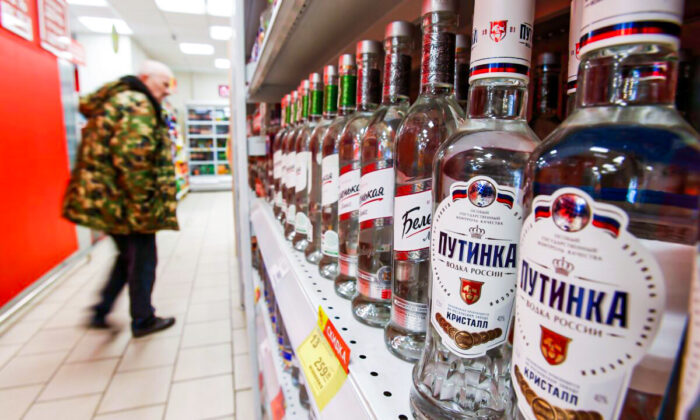 A customer walks past shelves with bottles of vodka in a supermarket amid the COVID-19 pandemic in Moscow, Russia, on April 8, 2020. (Maxim Shemetov/Reurers)
Republicans

Russia’s invasion of Ukraine has triggered boycotts in the United States, with governors of four states seeking to limit the sale of Russian products, including vodka.

Texas Restaurant Association members said they “stand ready” to help businesses find alternatives to Russian imports and announced “solidarity” with the Ukrainian people. The Texas Package Stores Association also said it was ready to support economic sanctions against Moscow by removing Russian imports from its stores.

Utah Gov. Spencer J. Cox, a Republican, has issued an executive order asking the Utah State Liquor Stores and the Utah Department of Alcoholic Beverage Control to remove all “Russian-produced and Russian-branded” products off the shelves “immediately.” The Governor’s Office of Economic Opportunity will also review the state’s procurements, according to the executive order signed Feb. 26.

In Ohio, Republican Gov. Mike DeWine has asked the Ohio Department of Commerce to stop the purchase and sale of all vodka made by Russian Standard, the “only overseas, Russian-owned distillery with vodka sold in Ohio.” The company sells vodka under the brand names Russian Standard Vodka and Green Mark Vodka.

“Ohio Liquor estimates that there are approximately 6,400 bottles of vodka made by Russian Standard currently for sale in Ohio’s 487 liquor agencies across the state. Retailers have been asked to immediately pull Green Mark Vodka and Russian Standard Vodka from their shelves,” DeWine said in a Twitter post.

Despite these initiatives, Russia might not be affected much by the boycott. Only about 1.2 percent of all vodka imports into the United States in the first half of 2021 came from Russia, according to data from the Distilled Spirits Council of the United States.

The most popular vodka brands sold in the United States, such as Smirnoff, Svedka, New Amsterdam, Tito’s, Absolut, Ciroc, and SKYY, are made either domestically or in European countries such as the UK, France, and Sweden.

Liquor stores in Canada also have announced a boycott of Russian alcoholic beverages. Canada imported roughly $3.78 million worth of such beverages from Russia last year, down 23.8 percent from 2020. In Ontario, 679 stores will remove all alcoholic products from Russia.

Some have expressed a mixed response to this retail boycott, claiming that the overall effect on the Russian economy will be minimal, while expressing concern for small local vendors who have already purchased the inventory.