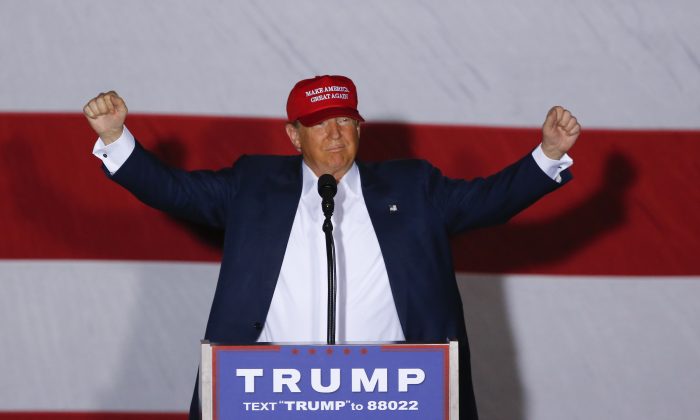 HANOVERTON, Ohio—GOP front-runner Donald Trump tried to prove over the weekend that no perceived misstep can derail his march to the Republican presidential nomination.

Trump enjoyed a relatively controversy free multi-state tour Sunday ahead of primaries that could determine whether he wins the GOP nomination without a contested summer convention.

Perhaps most critical to that equation is Tuesday’s winner-take-all contest in Ohio, where the real estate mogul and the popular governor, John Kasich, have intensified their focus on one another — Trump calling his rival “a baby” and Kasich suggesting Trump and the violence at some of his rallies represent a “dark side” of American society.

Besides Ohio, candidates are readying their closing arguments in Illinois, Missouri, North Carolina and Florida, with the total number of delegates at stake Tuesday accounting for more than a quarter of the 1,237 necessary for nomination.

Texas Sen. Ted Cruz argues that only he can keep Trump from reaching the required majority, while Florida Sen. Marco Rubio tries merely to remain relevant, hoping his home-state voters defy the polls and give him justification to extend his candidacy.

Trump tried Sunday to shift attention away from the intense criticism that followed harrowing scenes Friday of a melee in Chicago, where he canceled a scheduled rally amid a near-riot among his supporters, protesters and authorities.

“If we can win Ohio, we’re going to run the table, folks,” Trump boasted in West Chester, Ohio, on Sunday, one of three events he held with only occasional interruptions from protesters.

None of those interruptions led to violence, a stark turn from the scenes in Chicago and a Saturday rally in which a dissenter stormed the stage as Trump spoke, only to be subdued by Secret Service agents.

Kasich wasn’t buying it, reversing his months-long practice of avoiding the topic of Trump.

Speaking with The Associated Press aboard his campaign bus between stops in Ohio, Kasich read a list of Trump quotes compiled by an aide. They included Trump’s comments that his audiences should “hit back” a little more and a statement that he’d like to “punch” a protester “in the face.”

Trump has often declared the country must “toughen up,” and suggested one man who was physically assaulted at a November rally deserved the treatment. He confirmed earlier Sunday that he was considering assisting a North Carolina man charged with assault after video captured him sucker-punching a protester at a March 9 rally in Fayetteville, North Carolina.

Trump answered this weekend by casting Kasich as weak and deliberately mispronounced his rival’s Czech surname.

“He’s not the right guy to be president. He’s not tough enough, he’s not sharp enough,” Trump said at an event outside Dayton.

In line with his protectionist economic pitch, Trump hammered Kasich for supporting the North American Free Trade Agreement as a member of Congress in the 1990s.

And he went on to incorrectly identify the governor as KASE-itch. “Like, most people don’t even know how to pronounce his name. Kase-ick! Kase-ick!” Trump mocked. “He cannot do the job, folks. He’s not your president.”

Despite Sunday’s relative calm, Trump’s events unquestionably have become increasingly tense over the course of his campaign, and the candidate has frequently called for aggressive tactics against protesters, with Chicago’s events giving his rivals a new opening to criticize a front-runner they side-stepped or even praised for months.

“I’m troubled by the rallies that Donald holds, where he asks all the people there to raise their hand and pledge their support to him,” Cruz said on NBC’s “Meet the Press.”

A distant third in delegates, Rubio compared Trump to third-world “strongmen,” and said the tone of the campaign “is really going to do damage to America.”

The senator has gone so far as to say his supporters in Ohio should vote for Kasich to help derail Trump. Kasich has not returned the favor.

Cruz argued in Columbus, Ohio, that Republican voters are wasting their time with either Kasich or Rubio. Kasich has yet to win a single primary; Rubio has won three.

Against that backdrop, Trump continued to blame protesters, media and even Democratic presidential hopeful Bernie Sanders for the caustic environment around his campaign. Trump said the Sanders campaign is organizing protesters, a charge Sanders called “a lie.”

Trump assured his backers their frustration is righteous rage against a corrupt political and economic system. He cast his naysayers as “bad people” that “do harm to the country.”

Though by the end of his busy Sunday, he seemed to miss the commotion.

In Boca Raton, where he spoke in an outdoor amphitheater on a balmy Florida night, he asked, 20 minutes into his speech, “Do we have a protester anywhere? Do we have a disrupter?”