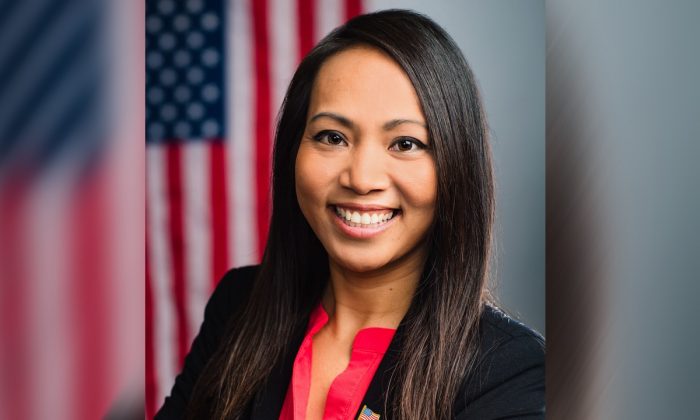 A Republican Congressional candidate for California’s 47th district in 2020, Amy Phan West, has accused her Democratic opponent of intolerance and starting an online slanderous campaign against her and her family.

West, a legal Vietnamese immigrant, is pitched in the 2020 election against Democrat Alan Lowenthal, who has been representing California’s 47th district since 2013.

The Republican candidate, who is married to a white man, claims supporters of her Democratic opponents labeled her a Klu Klux Klan member and that their comments show their prejudices and intolerance toward her because she doesn’t share their leftist ideologies.

“Those individuals vilifying and targeting my family online with outlandish and bigoted posts brought to our attention exposes how radical and unhinged the leftist supporters of my Democratic opponent have become,” West said in a statement to The Epoch Times.

West said she was recently attacked on Reddit and called a “white supremacist” because she supports President Donald Trump and his America First agenda.

She said she was attacked by her Democratic opponent’s supporters “in response to a photo of her holding a large Trump 2020 flag,” according to an earlier statement released to the media. She claimed she was severely reprimanded for marrying a white man and her children’s ethnicity was also questioned.

“Kids look Guatemalan as [expletive]. LMAO! They are just ecstatic that Trump is not putting their kids in cages,” one attacker said on Reddit, according to the release.

A screenshot of the original Reddit post shared by West on her Facebook on July 24 read: “White supremacist Asian woman proudly holding MAGA flag. Guess the race of her husband?”

West, who describes herself as a small business owner and is a mother to three boys, said she wants to be a part of the solutions required for many problems facing her region. She demanded that Lowenthal publically condemn the attacks against her.

“I am urging my district Rep. Alan Lowenthal, who also is my opponent, to publicly denounce such unwarranted and bigoted attacks. I live in his district and if he thinks, as my Representative, that there is no problem with his supporters defaming me online, then he is clearly an accomplice to the problem,” West wrote to The Epoch Times.

She said these attacks will not discourage her from staying in the race against Lowenthal in the 2020 general elections.

“Rep. Lowenthal has been in Congress a few terms now, and what exactly has he accomplished for our district? Nobody can’t point to anything he has done. We see he is a strong supporter of the witch hunt against the President that was based on a fake Russian dossier paid for by Hillary Clinton,” said West.

She accused Lowenthal of ignoring people in his district and playing party politics.

“The folks in our district know that the Democrats’ aim to impeach the president based on collusion is dead. So now Lowenthal and his party are focused on trying to impeach the president based on obstruction of a sham investigation that found him guilty of no crime. This is how Lowenthal is serving the people in our district, serving his party politics and ignoring the people,” West told The Epoch Times.

The Congressional aspirant said these attacks show how much the “progressives” care for minorities.

“But in reality, their hate-filled comments show contempt for anyone who doesn’t walk lockstep with their Progressive Socialist agenda,” said West in her statement to the media.

She said she decided to run for Congress against Lowenthal because in 2018 the Republican candidate was not embraced by the community.

Congressman Lowenthal, who is a co-chair of the Congressional Caucus on Vietnam, had earlier served three terms as a State Assemblymember and two terms as a state Senator. He was a professor of psychology at California State University in Long Beach until 1998.

West and her family escaped communism in Vietnam in 1984 in a dingy fishing boat and after three days at sea were rescued by a German oil tanker.

After waiting several years in refugee camps in Vietnam and the Philippines, the family finally gained legal immigration status in the United States, according to a post shared by West on Facebook.