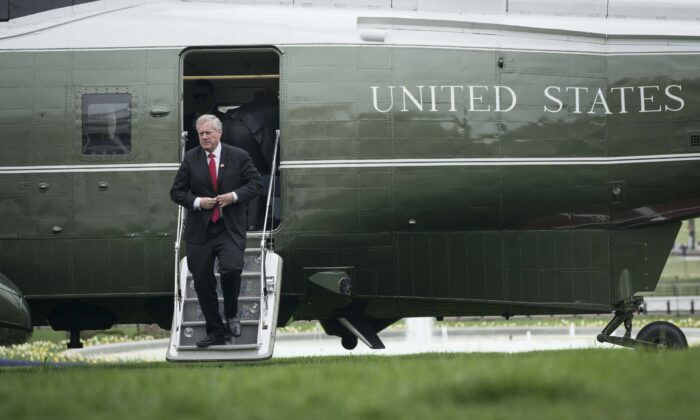 “Mark has a good history with the president. It actually started out with him speaking truth to power in a very difficult situation,” Rep. Ted Budd (R-N.C.) told The Epoch Times on March 31.

“And, of course, Mark graciously stood his ground and then was able to explain to the president why this was a bad bill. We were able to improve and to get it passed in the House.

“You know, that was a very courageous, awkward situation, and I think the president enjoyed Mark and appreciated his standing his ground then.”

Budd was one of numerous congressional Republicans interviewed this week by The Epoch Times, all of whom described Meadows as a man of strong principles who’s quite capable of gracefully advancing them while winning respect from opponents.

Meadows officially began his duties as Trump’s White House chief of staff earlier this week after self-quarantining for two weeks following his exposure to an individual who had tested positive for the CCP virus, often referred to as the novel coronavirus. Meadows has shown no symptoms of the virus.

The former congressman was, as a founding member of the House Freedom Caucus, among the most visible conservative warriors on Capitol Hill.

But he was also among the most liked across the partisan aisle in Congress, and Budd now expects Meadows’s negotiating skills to synchronize well with Trump’s management style.

“Trump is an executive, and he can run an office, but he needs not just that, but he needs an adviser as well, somebody that is well-connected, understands the process, can navigate through Congress, and who will speak truth to him,” Budd said.

Budd noted that Meadows was deeply moved when his close friend, Rep. Elijah Cummings, a Baltimore Democrat, who was chairman of the House Committee on Oversight and Government Reform, died in October 2019.

“He seems to have maintained friendships all the way back to his days in business. He just seems to understand the value of relationships, and he can cut through the clutter and see people for who they are,” Budd said.

Meadows has a talent for cutting through other kinds of clutter as well, according to Sen. Mike Lee (R-Utah), who told The Epoch Times that “Mark is really good at taking a big, contentious, thorny issue and peeling back the layers one by one.”

Lee said Meadows then examines “each layer of it from different angles and then figures out how everything can fit back together, but in a new and improved format.”

Trump “could not have chosen better, and I am glad Mark Meadows is in that position,” Lee said. “He’s everything you would want in a chief of staff. He’s loyal, smart as the day is long, he’s principled, he’s organized, and he recognizes that one’s principles and pragmatic concerns can be addressed simultaneously.”

One reason Meadows is so respected across ideological divides, Lee says, “is because they know where he stands. … He is someone who is willing to put principle above party and above ego.”

Rep. Louie Gohmert (R-Texas) told The Epoch Times he believes Meadows will be especially effective in two areas, making sure the people working for Trump in the White House and the executive branch are the right appointees for their jobs, and in cultivating the cooperation needed to move important legislation through Congress.

“He has a good BS detector, and I’d say that, as a devout Christian, he can work with anybody. But he does understand when people are lying to him, and it does play on how he views their future comments and advice.”

Gohmert added that Meadows “is quite good at talking people into doing things even when they may think that’s not the best idea, and he’s just got a good feel for the people or problems that are standing in the way of the president being successful.”

Both Gohmert and Budd pointed to Meadows’s wife, Debbie, as a tremendous asset for the former congressman and for the president.

“In the darkest days of the 2016 campaign, she got on a bus and across North Carolina and other states, and did ‘Women for Trump’ to help him win the state,” Budd said.

“That was very key when it was not a popular thing to do. They stood up and saw that this was the man that needed to win, and what he would ultimately stand for, and Debbie had a lot of foresight there,” he said.

“I think it has to do with having such a strong inner core, he and Debbie both,” Gohmert said.