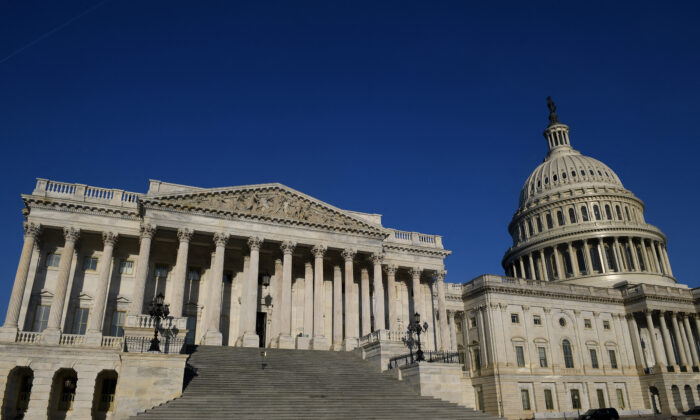 The House side of the U.S. Capitol is seen in the morning in Washington, on March 10, 2021. (Olivier Douliery/AFP via Getty Images)
Congress

As the two major political parties prepare to battle for the Majority in the U.S. House of Representatives after the upcoming 2022 elections, each is raising millions for their elections, and currently the two parties are in a close fundraising tie.

The National Republican Congressional Committee (NRCC) announced Thursday that it raised $12.2 million in September and $25.8 million in the third quarter.

The DCCC’s total fundraising in the first nine months of 2021 was $106.5 million, slightly ahead of the roughly $105 million the NRCC’s brought in so far this year.

However, the House GOP reelection committee had a lead with their cash on hand reporting $65 million, and will be using these funds to help candidates in key districts ahead of the 2022 elections.

Chair of the NRCC Rep. Tom Emmer (R-Minn.) said that the Republican campaign committee members are focused on 57 key districts in their effort to take back the majority after the 2022 elections, and within the larger number they are laser focused in 29 of those districts, where their messaging is more likely to flip the seats in their favor.

Emmer said that 29 of the targeted seats “are districts that Donald Trump either won last fall or they were decided within the slimmest of margins.” Republicans will be highlighting the failings of the Biden administration, especially the rising cost of basic goods.

“We’ve got a lot of work to do yet but you just hit two of the big issues. Voters all across the country are seeing prices rise in the grocery store, at the gas pump, the higher cost of living, and they literally hold the president and socialist Democrats in the House accountable,” Emmer told Fox News in an August interview.

Meanwhile, the DCCC Chair Rep. Sean Maloney (D-N.Y.) told MSNBC in a September interview that Democrats are putting Americans first with the Build Back Better agenda in the $3.5 trillion dollar budget reconciliation package while Republicans are embracing the alleged election fraud and inciting white supremacists. He said the Recall of Governor Gavin Newsom showed that Democrats will win in 2022.

“And what this was, was a good test of Biden versus Trump, of Newsom versus Elder, of the red team versus the blue team, and this toxic message of … lying about the election, of playing footsie with white supremacists, taking away a woman’s reproductive freedom, and what happened—two to one we beat them,” said Maloney.

While Republicans are highlighting inflation and rise in crime as direct results of the Biden and Democrats’ policies, Maloney said Democrats should detail for the American people what is in their latest legislative package and how it will help Americans thrive.

“We are laying the foundation right now for a whole new generation of American prosperity that is inclusive. These are historic things we’re doing, in the rescue plan, in the Build Back Better plan, in the infrastructure plan,” said Maloney.

Maloney also criticized the GOP’s support of former President Donald Trump. “The Republican Party has made it very clear that blind loyalty to Donald Trump’s ego is the only principle they hold fast to,” Maloney said in an Oct. 14 press statement.

Emmer has said Republicans’ focus to win in 2022 will be on contrasting their agenda with the socialist policies that Democrats are pushing. “Republicans are ready to fire Nancy Pelosi and stop Democrats’ socialist agenda. The NRCC’s record-breaking fundraising will give us the resources we need to expand the battlefield and win all over the country,” Emmer said in an August press statement.

The AP contributed to this report.