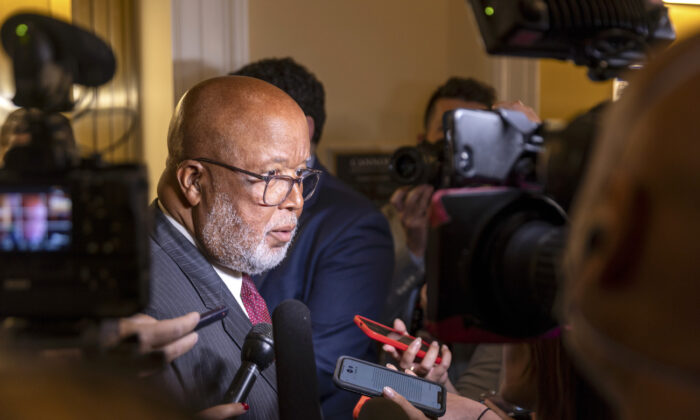 Reps. Bennie Thompson (D-Miss.) and Carolyn Maloney (D-N.Y.) are demanding that a Department of Homeland Security lead investigator into the Jan. 6 Capitol breach step down over his handling of the investigation into purportedly missing Secret Service texts from Jan. 6.

In mid-July, the Secret Service responded to a subpoena from the House January 6 Committee demanding that it turn over documents and information, including text messages between agents, from the weeks leading up to and on Jan. 6, 2021. The Secret Service complied with the subpoena—but texts from Jan. 5 and Jan. 6, which the committee considered crucial, were not a part of the batch.

Democrats on the committee, including Reps. Stephanie Murphy (D-Fla.) and Jamie Raskin (D-Md.), were quick to accuse the Secret Service of intentional erasure of the texts and of incompetence in handling the preservation of the records.

The Secret Service denied these charges, with a spokesman arguing that agents rarely use cell phones to discuss major security issues and that the texts were missing because no texts had been sent that day.

Now, Thompson and Maloney, who serve as the chairs of the House January 6 Committee and House Oversight Committee respectively, are demanding the resignation of DHS Investigator General (IG) Joseph Cuffari for his handling of the investigation into the missing texts (pdf).

In the letter, Thompson and Maloney cited a CNN report alleging that Cuffari had known of the missing material much longer than originally thought.

“We are writing with grave new concerns over your lack of transparency and independence, which appear to be jeopardizing the integrity of a crucial investigation run by your office,” the duo wrote. “According to recent reports, your office learned that the Secret Service was missing critical text messages as part of your investigation of the January 6 attack against the U.S. Capitol in May 2021—seven months earlier than previously revealed.”

“The Committees have obtained new evidence that your office may have secretly abandoned efforts to collect text messages from the Secret Service more than a year ago,” the lawmakers claimed. “These documents also indicate that your office may have taken steps to cover up the extent of missing records, raising further concerns about your ability to independently and effectively perform your duties as Inspector General.”

“Nearly three weeks ago, on July 13, 2022, you wrote to Congress and—for the first time—stated that Secret Service text messages from January 5 and 6, 2021, had been erased,” the letter continued. “Your notice to Congress came roughly 14 months after you reportedly learned that the Secret Service texts were unavailable even though Inspectors General are required by law to ‘immediately’ report problems or abuses that are ‘particularly serious or flagrant.'”

According to Cuffari’s July 13 report, the texts in question had been lost during a phone device upgrade program not long after Jan. 6, during which agents were reportedly given broad discretion about which documents and data to keep from their old phones and which to delete.

Maloney and Thompson then listed an array of information apparently proving that Cuffari had long since abandoned efforts to seek out the missing texts.

One such document unveiled by the pair—a July 27, 2021, email from DHS Deputy Inspector General for Inspections and Evaluations Thomas Kait to Jim Crumpacker, a senior liaison official at DHS—showed Kait telling Crumpacker that the official policy of the IG was to drop investigations into the texts from Jan. 5 and Jan. 6.

“Jim, please use this email as a reference to our conversation where I said we no longer request phone records and text messages from the [Secret Service] relating to the events on January 6th,” Kait wrote.

Responding to this finding, the lawmakers wrote: “It is unclear to the Committees why your office chose not to pursue critical information from the Secret Service at this point in this investigation.”

It was not until four months later, on Dec. 3, 2021, that IG Cuffari again submitted a request to the DHS for retrieval of the texts, the lawmakers said.

The duo also revealed that Deputy IG Kait had, prior to sending a memorandum to the DHS, cut language detailing the importance of the texts to the larger investigation of Jan. 6. Other cut sections also allegedly criticized the DHS for failing to respond to Cuffari’s Dec. 3 request.

“These documents raise troubling new concerns that your office not only failed to notify Congress for more than a year that critical evidence in this investigation was missing, but your senior staff deliberately chose not to pursue that evidence and then appear to have taken steps to cover up these failures,” Thompson and Maloney wrote.

“We recently called for you to step aside from this matter and for a new IG to be appointed in light of revelations that you had failed to keep Congress informed of your inability to obtain key information from the Secret Service,” they continued. “Removing yourself from this investigation is even more urgent today.

“In addition, in light of the cascading revelations about your failure to conduct this investigation effectively and communicate truthfully with Congress, our Committees need further information to determine the full scope of potential mismanagement and misconduct in your investigation and to identify further actions Congress may need to take. This information will be essential to ensuring that the duties of the DHS OIG are carried out in an ‘independent and objective’ manner and that Congress is kept ‘fully and currently informed about problems and deficiencies’ as required by law.”

Specifically, Thompson and Maloney asked for all documents and internal communications related to the decision to drop efforts to obtain the texts, communications related to notifying Congress about the missing texts, and all internal IG documents involving the deletion or erasure of the texts of Secret Service agents and other top DHS officials serving during the Jan. 6 Capitol breach.