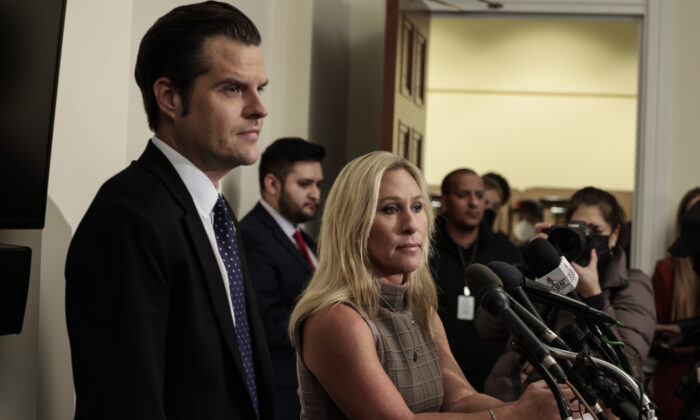 U.S. Reps. Marjorie Taylor Greene (R-Ga.) and Matt Gaetz (R-Fla.) take exception to conservatives who downplay the events of Jan. 6, 2021—but not for the same reason as Democrats.

“We’re worried there are a lot of folks who don’t understand the severity of what happened. Particularly, if it was so severe that it was animated and encouraged by assets of the federal government,” Gaetz said at a Jan. 6 press conference at Capitol Hill.

“That would be a far greater scandal than anything that the Democrats have talked about.”

The notion that the FBI had foreknowledge of, or even actively facilitated, the Capitol Hill riots has been deemed a wild conspiracy theory by most major media outlets and fact-checkers. But Greene and Gaetz said there’s a strong case to be made that, at the very least, the issue needs to be investigated by Congress.

Citing an exposé from Revolver News, Gaetz and Greene both spoke at length about the now-infamous case of Ray Epps. At the press conference, the lawmakers showed reporters some videos of Epps calling for people to enter the Capitol and seemingly directing others at the site of the first breach.

“The last thing that happens before the initial breach is Ray Epps whispering in someone’s ear,” Gaetz said. “I think it’s clear from the videos that Ray Epps incited people, but he hasn’t been charged.”

Along with Epps—who has been subpoenaed to testify in the case of a Jan. 6 defendant—Greene wants to know the identities of other participants who haven’t been charged.

“Who were these people cutting the fences? I didn’t see anyone of them in the D.C. jail,” Greene said, referencing her tour to observe the conditions of the district’s correctional facility.

Greene and Gaetz noted that at least 12 individuals involved in the plot to kidnap Michigan Gov. Gretchen Whitmer were FBI informants—and at least one informant marched into the Capitol. Gaetz questioned the extent to which these kinds of informants are actually encouraging crime.

“Are they just sitting quietly in these meetings, or are they actively taking part?” Gaetz asked.

Gaetz and Greene vowed to get to the bottom of these questions.

Reporters at the press conference asked why Gaetz and Greene are spearheading this issue, while the vast majority of their Republican colleagues have either condemned the rioters or kept silent.

“I can’t answer for them. Unfortunately, Republicans don’t seem to want to go into the truth like Congressman Gaetz and myself,” Greene said.

Greene also denounced Sen. Ted Cruz (R-Texas) for his characterization of the Jan. 6 riots as a “violent terrorist attack.”

“I think Senator Cruz is smart enough to know since he’s an attorney that no one has been charged with terrorism or insurrection,” she said. “I think that was very irresponsible of him, and I completely disagree.”

Reporters further probed Greene and Gaetz about why they think the FBI would have wanted to encourage Jan. 6. Harking to the FBI’s Counterintelligence Program in the 1960s—when the bureau infiltrated numerous political groups—Gaetz said the FBI’s motive “may have been to ensnare and trash a political movement.”

Greene said she didn’t know, but that she wants to find out. She encouraged reporters to investigate the matter.

“What if the FBI was involved? What if that caused a member of the press to get killed?” Greene asked. “What would you all be saying to that?”