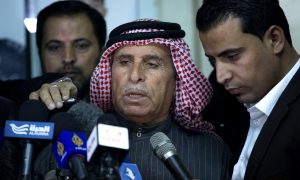 Warplanes in Jordan took to the skies on Thursday in retaliatory strikes against Islamic State targets, but rumors that the country’s King Abdullah would join in on military operations appeared to be based on Internet rumors and misconstrued official rhetoric.

The rumor that Abdullah would man a fighter jet to bomb ISIS was reported by FOX news in the United States, and by several media outlets and sources in the Middle East. It was also spread through Twitter and Facebook.

Abdullah has vowed to wage a “harsh” war against ISIS after the brutal murder of Jordanian pilot Muath al-Kaseasbeh was made public in a graphic video. The pilot was shown being burned alive in a cage at the end of a slickly-produced 22-minute ISIS propaganda video. To date, Jordan has been part of a U.S.-led military coalition that has bombed IS targets in both Syria and Iraq since last fall, but until now Jordanian warplanes are only known to have carried out raids in Syria.

Officials did not say on Thursday where the airstrikes were carried out. But the king paid his condolences to the family of al-Kaseasbeh on Thursday just as the airstrikes began, telling mourners that planes had just come back from Raqqa, Syria. Raqqa is the self-declared “capital” of ISIS.

Jordan’s harsh rhetoric against ISIS, typical of Middle Eastern politics, has been bolstered by the unifying rage expressed throughout much of the Middle East over the murder of the pilot.

That rage morphed into admiration for a hero in King Abdullah on Thursday as reports surfaced that the king planned to personally join in airstrikes. Abdullah does have a military background and is often shown in a military uniform in official photos.

Reports that Jordanian #KingAbdullah is leading combat missions is probably false, but crazy cool if it true! pic.twitter.com/GZfxfn50UW

That’s some proper leadership – Jordan’s #KingAbdullah will be co-piloting bomber on tonight’s air strikes on IS pic.twitter.com/iVQsBEDcLv

The two photos most widely circulated show the king standing stoically in combat fatigues with a determined expression on his face and one of him in the cockpit of a plane. Despite a strong public reaction in support of the king directly joining in the fight, the photos turned out to be a bit dated.

The photo was originally posted on the king’s official Instagram account in June 2014. The caption reads, “His Majesty King Abdullah II, the Supreme Commander of the Jordan Armed Forces.” The same photo, cropped slightly, was posted on the official Facebook account, with a somewhat misleading caption.

The cropped photo and new caption were posted on February 3, two days before airstrikes began:

“His Majesty King Abdullah II, The Supreme Commander of Jordanian Armed Forces, cuts short his visit to the United States of America after the martyrdom of Muath Al Kasasbeh.”

A second photo of the king in a cockpit of a plane is actually a still from a promotional video about the king’s charity work from October 2014. The video shows the king taking three boys to a hospital for cancer treatment. At about 2 minutes and 11 seconds, Abdullah gives the kids the thumbs up from the cockpit.