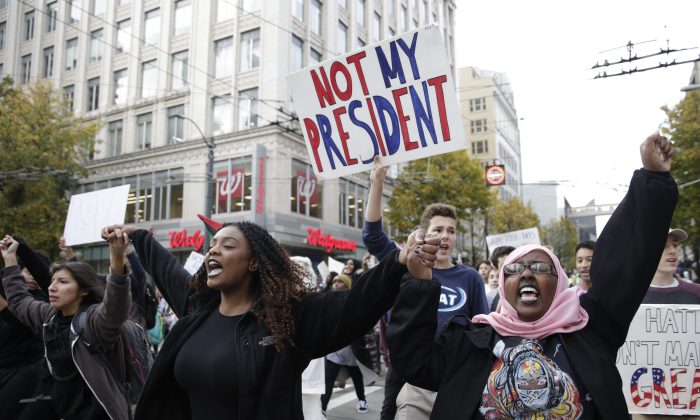 Local students and their supporters march during a walkout protest against US President-elect Donald Trump in Seattle, Washington on Nov. 14, 2016. (JASON REDMOND/AFP/Getty Images)
US

A 15-year-old supporter of President-elect Donald Trump was reportedly beaten during a protest in Rockville, Maryland, reported WTOP-TV.

The incident occurred during an anti-Trump march near Richard Montgomery High School. Many students were carrying “Love Trumps Hate” signs. NBC Washington reported that between 300 and 500 students participated in the walkout.

A teenager wearing a “Make American Great Again” was beaten, and a student involved in the assault is facing charges, police said.

WTOP, citing police, reported that a group surrounded the teen before throwing him to the ground and kicking him in the ribs.

Rockville and Richard Montgomery HS students participate in protests during the morning outside of the Montgomery County Circuit Court. pic.twitter.com/nqtox7iVzJ

Maj. Michael English with Rockville police said the victim wasn’t the aggressor in the attack.

“They jumped him and beat him up pretty bad,” Max Stucky, a witnessed of the attack, told WTOP.

The teen wasn’t seriously hurt, but he was taken to the hospital with non-life threatening injuries.

Trump Battles Back Against Charges of Transition Tumult

England said that the demonstration was otherwise peaceful.

“Our goal is to keep our students safe, under adult supervision and engaged in the learning process. It is for this reason that I am asking and expecting all students to remain in school and participate in the daily educational program as intended,” Montgomery County Public Schools Superintendent Jack Smith said, reported NBC.

Twelfth grader Taylor Clayton told WTOP that Trump supporters at her school made rude and racist comments after the election. “We’re trying to get people together instead of saying more negative things that add on more conflict,” tenth grader Anyah Clayton told the broadcaster.