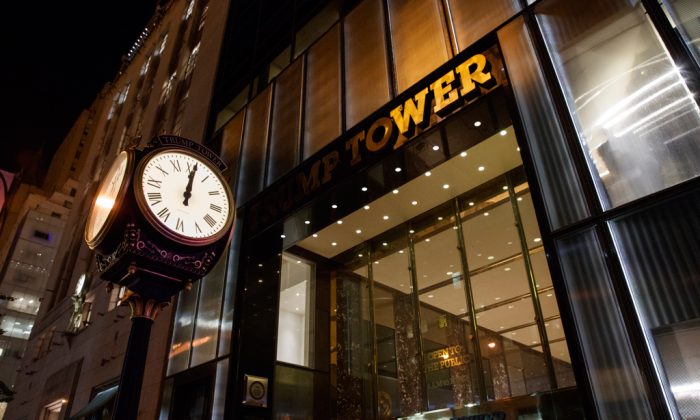 A clock sits outside of Trump Tower in New York on Oct. 8, 2016. (AP Photo/Evan Vucci)
Politics

The U.S. Secret Service detail protecting President-elect Donald Trump’s family members are considering renting a floor at the Trump Tower, according to a report.

They’re planning on turning the floor into a command post that operates 24 hours per day, seven days per week, CNN reported.

Jared Horowitz, the manager of commercial space at Trump Tower, said the floors are available to rent with average floor office space between 13,500 and 15,500 square feet. The floors cost approximately $1.5 million.

Reports say that Trump’s wife, Melania, and his 10-year-old son, Barron, are planning on staying at the Trump Tower until Barron’s school year ends next summer. After that, they will move into the White House.

A law enforcement official told CNN that this sort of planning—such as renting a room—is typical of the Secret Service. “What is unordinary is that the President Elect lives on 5th Avenue,” the official told the network.

More than 100 Secret Service personnel would be needed for constant protection over the First Family.