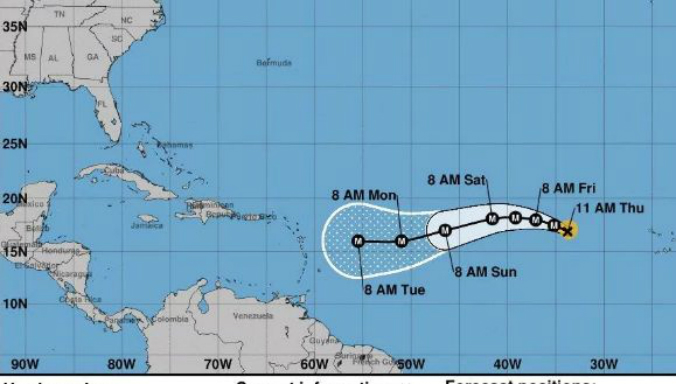 It’s unclear what path Irma will take, but just in case, Florida residents have been encouraged to go get supplies by the middle of the week in case the hurricane hits Florida, CBS12 in South Florida reported.

Jacob Tibbs, a Home Depot manager in Palm Beach County, noted that “shoppers are already coming into the hardware store, picking up hurricane items: from generators to water,” said CBS12.

If people wait until the last minute, they might not be able to buy up basic supplies in time if stores run out.

According to TCPalm, here are supplies one might need:

On Sunday, Irma strengthened to become a Category 3 hurricane and is now about 885 miles east of the Leeward Islands, The Weather Channel reported.

Areas from Puerto Rico to the Bahamas could be hit by the storm.

Some forecasts place the U.S. East Coast in the path of Irma.

“Irma is a serious threat for the Caribbean islands and United States,” AccuWeather Lead Long-Range Meteorologist Paul Pastelok said on the website.

“This hurricane has the potential to be a major event for the East Coast. It also has the potential to significantly strain FEMA and other governmental resources occurring so quickly on the heels of Harvey,” Evan Myers, Senior Vice President of AccuWeather, was quoted as saying.

UCAR scientist and FEMA task force lead Michael Lowry told the Weather Channel that storms that turn into hurricanes near the Cabo Verde Islands don’t generally make U.S. landfall, said Accuweather. However, he cautioned, if they do, they’re significant.

“The forecast cone is several hundred miles wide, so we’ll all be watching, waiting and being prepared,” meteorologist Philip Klotzbach with Colorado State University told USA Today on Sunday. “We don’t want the entire coastline from Florida to Maine to freak out, but pay attention.”

He said the storm could turn towards the northeast and head back out into the Atlantic Ocean—away from the U.S. mainland.

“The forecast cone is several hundred miles wide, so we’ll all be watching, waiting and being prepared,” Klotzbach said. “We don’t want the entire coastline from Florida to Maine to freak out, but pay attention.”

“Subtle shifts in the path now can make big changes as to where it goes next,” Klotzbach added. “Follow your local emergency managers and start thinking about what you’d do if there’s an order to evacuate or shelter-in-place.”

And as the National Hurricane Center said in a recent update: “Everyone in hurricane-prone areas should ensure that they have their hurricane plan in place, as we are now near the peak of the season.”