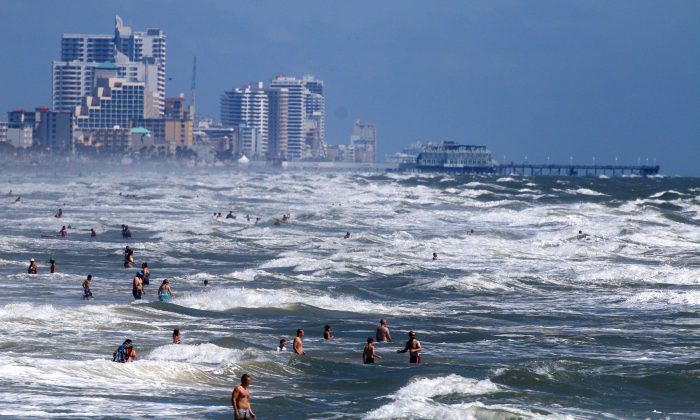 A stock photo of a beach (The Daytona Beach News-Journal, Jim Tiller/AP Photo)
US News

There has been an increase in reports of sea lice, or jellyfish larvae, biting swimmers in Virginia Beach.

Lifeguards reported to WTKR, a local news outlet, that sea lice are on the rise at the beach, and people have noticed rashes and bumps on their skin.

“It felt like sand on your clothes and then it started to feel like things were biting you,” Cade Welsh, a Virginia Beach local, told the station.

He continued: “If you, like, scratch, it will feel like sand and if you look, you’ll see a clear thing with blue eyes.”

One girl visiting from New York added to WTKR: “We started running up to the shore, and then we felt around and there was stuff crawling on us.”

“They don’t mean to, but they start to inject a little toxin, which causes a rash in the area,” Gill told the outlet. “It’s stuck in your suit and you can’t really see it very well. You need to get that suit off and rinsed and washed out and cleared of all the larvae, and you need to get washed out of all the larvae in any of the hair areas—but that’s hard to do when you’re on a public beach.”

To deal with the problem, Gill called on swimmers who got stung to wash their bathing suits and affected areas on their body. Topical ointment or products that deal with rashes work, he said.

However, a local official Julie Levans, the senior curator at the Virginia Aquarium and Marine Science Center, said that the sea lice might be blue crab larvae.

The larvae produce the same effect as the jellyfish larvae and get caught in bathing suits, the Times-Dispatch reported.

“The little blue crab larvae look like little aliens and do have little pinchers,” Levans told the paper. “They’re pretty harmless. There’s not too much trauma they can actually do just because they can do so little.”

Swimmers can’t spot the little jellyfish larvae, as they’re microscopic. They can sting just like a fully grown jellyfish, leaving a mark. The rash they cause is called seabather’s eruption, experts have told CNN in a 2016 report.

Parks and Recreation officials for Palm Beach County added to ABC News at the time: “Some people do experience a prickling sensation while in the water, though itching usually starts several hours after being in the water and lasts two to four days but can last as long as two weeks.”

WebMD says that people definitely should not go in a pool or shower with their bathing suit still on.

“Fresh water will make the jellyfish start to sting again and may worsen your pain. Instead, take off your bathing suit as soon as you can and rinse your body. Wash your suit in hot water and toss it into the dryer to make sure all the larvae are gone. If you had a severe rash, you may even want to get rid of the suit,” the website says.