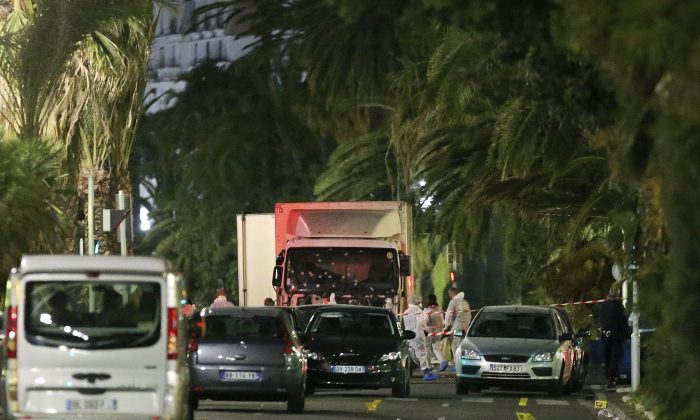 The truck which slammed into revelers late Thursday, July 14, is seen near the site of an attack in the French resort city of Nice, southern France, Friday, July 15, 2016. The truck loaded with weapons and hand grenades drove onto a sidewalk for more than a mile, plowing through Bastille Day revelers who'd gathered to watch fireworks in the French resort city of Nice late Thursday. (AP Photo/Luca Bruno)
Europe

Reports: Man With Large Knife Arrested at Vigil in Nice

A man with a large knife or machete was arrested at a vigil for the victims of the Nice, France, terrorist attack on Friday.

BuzzFeed News reporter Ryan Broderick said on Twitter that a crowd screamed at the man as he was placed in a police car. He said witnesses said the man was carrying a large blade.

At least 84 people, including children, have died in the attack in the southern city of France. The attacker drove as far as a mile, while hitting people on the sidewalk.

Crowd screamed at him as he was put in police car pic.twitter.com/fR0oe2mrPA

Members of the #NiceAttack crowd were crying. News crews chased cop car down the street. pic.twitter.com/NHCyi5SsUq

Eye witnesses say he had a “large knife”. One described it as a “machete”. Said he was trying to attack people.

Officials say that more than 200 people were injured, many critically.

The 31-year-old driver, Mohamed Lahouaiej Bouhlel, was shot by police. Bouhlel had been detained in March and convicted of voluntary violence with a weapon, The Associated Press reported. It’s unclear if Bouhlel, originally from Tunisia, had ties to terrorist groups.