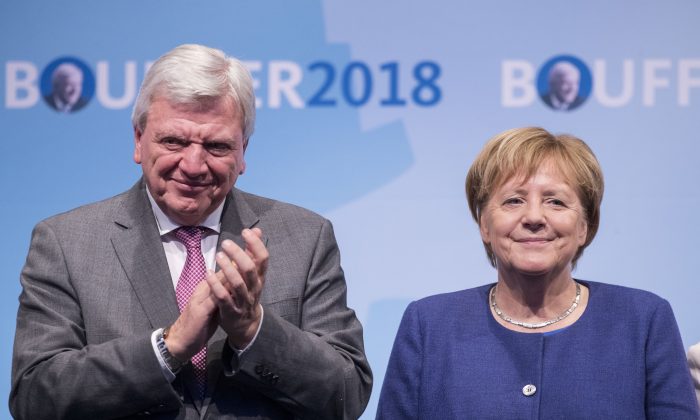 Reports: Germany’s Merkel Prepares to Give up Party Job

BERLIN—Angela Merkel told her conservative party on Oct. 29, that she intends to step down as its leader but remain Germany’s chancellor following a pair of state election debacles, German media reported.

Merkel had previously indicated that she planned to seek another two-year term as leader of her Christian Democratic Union at a party congress in December, but appeared to be moving quickly to acknowledge pressure for renewal.

Merkel has led the CDU since 2000 and has been Germany’s chancellor since 2005.

Merkel’s predecessor, Gerhard Schroeder, stepped down as leader of his center-left Social Democrats in 2004 as his government struggled, but remained chancellor. For years, Merkel insisted that the chancellor should also be party leader.

Merkel currently governs Germany in a “grand coalition” of what traditionally have been the country’s biggest parties—the CDU, its Bavaria-only sister, the Christian Social Union, and the Social Democrats. Her fourth-term government took office only in March but has become notorious for squabbling.

Sunday’s election in the central state of Hesse saw both Merkel’s conservative Christian Democratic Union and the center-left Social Democrats lose significant ground, while there were gains for both the Greens and the far-right Alternative for Germany. Merkel’s party managed an unimpressive win, narrowly salvaging a majority for its regional governing coalition with the Greens.

The debacle followed a battering in a state election in Bavaria two weeks ago for the CSU and the Social Democrats.

Nahles declined to comment Monday on the reports that Merkel might step down as CDU leader. The chancellor was scheduled to hold a news conference later in the day.