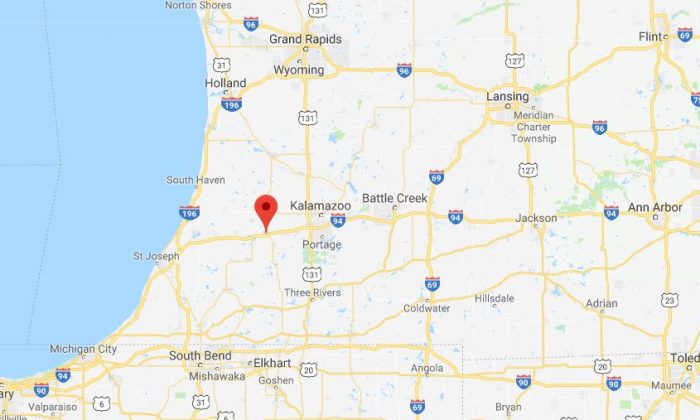 Officials are responding to a massive accident scene along Interstate 94 in Michigan near Paw Paw. (Google Maps screenshot)
US News

Officials are responding to a massive accident scene along Interstate 94 in Michigan near Paw Paw, WOOD-TV reported.

According to the report, Van Buren County dispatchers said that between 20 and 50 cars were involved in the pileup.

The westbound lanes were shut down, and traffic is being directed to another road.

The Weather Channel reported that some people were injured in the accident. There have been no reported deaths.

“Whiteout conditions” contributed to the accident, according to the Weather Channel.

Even though it’s cold in AR today; I’m so thankful I’m not covering or sitting in this I-94 pile up in Michigan! Been there, done that! https://t.co/DD0U0VyGrw

I-94 Near Kalamazoo, MI. 20+ car pileup. Long distance travel on I-94 east of Michigan City is not recommended this PM. https://t.co/5aZQ6YcAN3

BREAKING: Injuries have been reported after a 32-vehicle pileup in southwest Michigan: https://t.co/NwBqDM4E3m pic.twitter.com/VR9dSmfzRI

The incident triggered the Van Buren County Sheriff’s Department to activate the county’s emergency operations center, according to WOOD-TV.

The Red Cross, meanwhile, will send buses to assist drivers.

A dispatcher told the Detroit Free Press that the local police department sent “everybody that we have” to the accident. “Everyone who is available is there,” she added. The freeway between exit 56 and exit 66 is closed down, she said.

Traffic is already a mess along I-94 E of Michigan City. Heaviest snow is yet to arrive. I-80 is a better option than I-94 rn. #MIwx #INwx pic.twitter.com/HS5eazrxJY