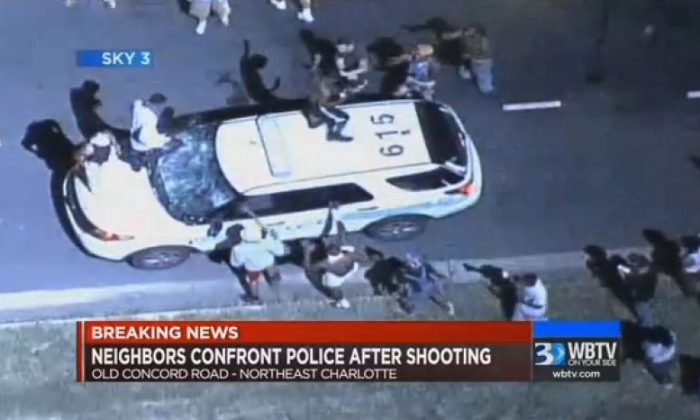 In this frame from video provided by WBTV, a police vehicle is damaged after protests broke out Tuesday, Sept. 20, 2016, in Charlotte, N.C., following a fatal shooting of a black man by police. (WBTV via AP)
US

Amid protests in Charlotte, some people looted a Walmart after Interstate 85 was shut down early Wednesday.

People also started fires along I-85 during the night, according to local media outlet WCNC. Some tractor-trailers were also looted, and the contents were removed to start two fires along the interstate.

The protests were sparked after a black man was shot and killed by a Charlotte police officer on Tuesday. In the incident, 43-year-old Keith Lamont Scott was shot at an apartment complex near the University of North Carolina, Charlotte, by a black police officer, identified as Brentley Vinson. They were at the complex to serve a warrant for another man, according to The Associated Press.

Police cleared I-85 by using tear gas several hours after traffic was blocked.

Walmart Employees are using wooden pallets to block the main entrance after protestors broke into the store overnight. pic.twitter.com/xnxovNjlj9

FOX46, citing a Walmart employee, reported that iPads and a flat screen television were stolen. Walmart is using pallets to block the front entryway. Grocery carts are being used to block the parking lot.

Charlotte-Mecklenburg Police Chief Kerr Putney told reporters on Wednesday that officers, who were searching for a suspect, saw Scott exiting a vehicle with a handgun. Officers told him to drop the gun and he got out of his car a second time while still carrying the gun. He said officers shot him because he posed a threat.

“It’s time to change the narrative, because I can tell you from the facts that the story’s a little bit different as to how it’s been portrayed so far, especially through social media,” Putney said, according to AP.

His comments were apparently referring to a video posted on social media of a woman claiming to be his daughter live-streaming the scene for about an hour following the shooting. “He didn’t have no gun. He wasn’t messing with nobody,” the woman said.

It was unclear if she witnessed the shooting.