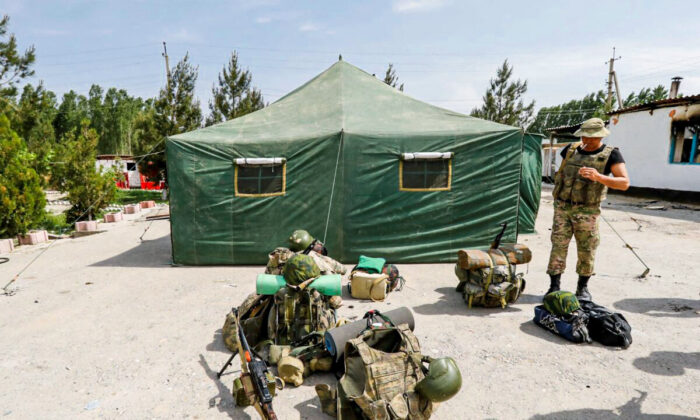 A Kyrgyz border guard smokes outside a temporary camp near a frontier border post in the village of Maksat in Batken province, Kyrgyzstan, on May 4, 2021. (Vladimir Pirogov/Reuters)
World

The conflict reportedly began near the Kyrgyz city of Batken after Tajik border guards closed a road that leads to sizable towns in Kyrgyzstan’s west.

Kyrgyz authorities say the Tajik guards have fired with mortars and grenade-launchers. Tajik authorities haven’t made statements about the conflict, but the Tajik service of Russian news service Sputnik reported that six Tajiks have been wounded.

The serpentine Tajikistan-Kyrgyzstan border is often a tense area. In 2021, at least 55 people died in clashes that erupted near the border in a dispute over water rights and the installation of surveillance cameras by Tajikistan.