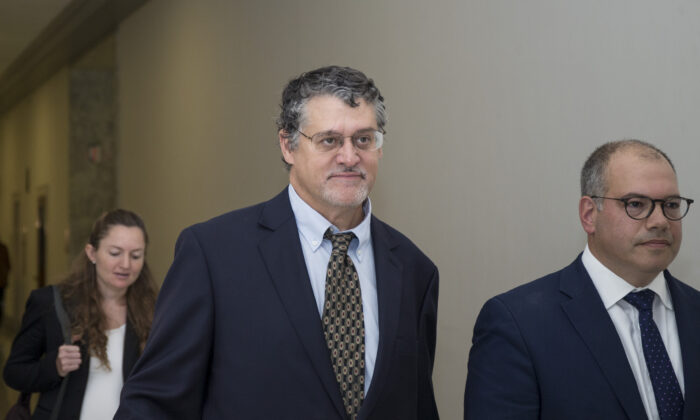 Reporters from ABC News, The Washington Post, and Slate were among those working closely with an operative firm on stories about alleged links between Donald Trump and Russia, newly released emails show.

ABC’s Matthew Mosk, now with CBS; the Post’s Tom Hamburger; and Franklin Foer, a Slate contributor who now works for The Atlantic, were among the reporters being fed information by Fusion GPS, a firm paid by Hillary Clinton’s campaign and the Democratic National Committee, according to the emails.

“Making arrangements to interview Millian on camera,” Mosk told Simpson. “We should chat.”

Several months later, just before posting a story on Trump’s ties with Russia, Mosk peddled theories about several people, including Millian, to Simpson and Jake Berkowitz, also of Fusion.

Other newly revealed missives showed that Peter Fritsch, another Fusion operative, claimed that Millian was “clearly kgb,” or part of the Russian secret police. Fritsch was speaking to Foer, sharing a link to a profile on Millian, who was a child when the KGB was dissolved.

Foer wrote back a day later, on June 28, 2016, providing an entire draft of an article he’d written about the theory, later debunked by U.S. authorities, that the Trump Organization had a secret back channel with Russia’s Alfa Bank.

“I have no idea what my editor will say. But can you guys scan it for omissions and errors?” Foer asked.

Hamburger, meanwhile, wrote to Simpson in July 2016 telling him that a rumor that Carter Page, another Trump campaign associate, met with Russians in Moscow and was described by a Russian source as “[expletive]” and “impossible.”

Hamburger indicated that the quote was passed on “by another reporter who likely doesn’t like this story,” prompting Simpson to say, “No worries, I don’t expect lots of people to believe it.”

The FBI surveilled Page in 2016 over claims he was a Russian agent but committed a number of errors and omissions in its court-cleared spying, Department of Justice Inspector General Michael Horowitz found. Investigators used information from an unsubstantiated dossier compiled by former British spy Christopher Steele with Fusion GPS’s help in applying for the warrants, despite agents developing details that were “inconsistent with the Steele reporting,” Horowitz told members of Congress after releasing his report.

Page didn’t respond by press time to a request for comment.

Millian told The Epoch Times via Twitter messages that Fritsch “is clearly a fool.” He also said he was interviewed by ABC under false pretenses.

“Instead of doing a professional interview [which] they promised they would do, they abused their journalistic ethics and started asking intruding personal questions such as where do I live, who is my girlfriend, if my girlfriend is a Russian, does she live in Brooklyn, etc.,” he said.

ABC released clips of the interview in September 2016. The same day, Clinton’s campaign used part of the recording to claim Trump “may be deeply indebted to another country.” The ad included a quote from Millian, who headed a U.S.–Russia business group, saying that Trump had received hundreds of millions of dollars from deals with Russian businessmen.

Mosk, the ABC reporter, also was bylined on a story in early 2017 alleging with little evidence that Millian was a source for one of the dossier’s most outlandish claims.

Clinton’s campaign also pushed a story by Foer that outlined the notion that the Trump Organization was secretly communicating with Alfa Bank, an allegation the CIA determined in 2017 wasn’t possible.

Hamburger wrote multiple articles about Millian, based on unidentified sources, that were corrected in 2021 following the indictment of one of Steele’s sub-sources. However, the paper has continued to refuse to name the sources.

The emails were released by special counsel John Durham’s team, which is prosecuting former Clinton campaign lawyer Michael Sussmann for allegedly lying to the FBI; the emails were supposed to be filed under seal. The Epoch Times obtained them before they were placed under seal.

Congressional investigators have said that Fusion GPS has a pattern of “seeding its opposition research into news stories” and that the firm paid journalists to report on Russia and Trump. Fusion GPS has said the records are protected and have been successful in preventing their release.

Fusion GPS was paid by Perkins Coie, a law firm tapped by Clinton’s campaign and the DNC, to conduct opposition research on Trump. The money was funneled through the law firm to try to shield it from investigators, investigators say, an assessment recently shared by the Federal Elections Commission.

Not all reporters were taken in by Fusion GPS’s claims. Jay Solomon, then of The Wall Street Journal, told operatives on July 25, 2016, that their thesis of Trump being a so-called Manchurian candidate—or beholden to Russia—”is worse than originally presented.” He asked for more information, but never published a story about it.

Solomon, who was fired in 2017 over violations of ethical standards and now works for ACPO Worldwide, told The Epoch Times in an email that he could never “stand up the leads” he pursued.

“You can do media scan[s]. I didn’t publish anything,” he said. “That’s the process most journalists follow: You get tips, you try and stand them up. And if you can’t, you don’t publish.”

Hans Mahncke contributed to this report.