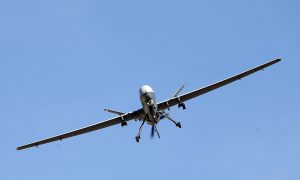 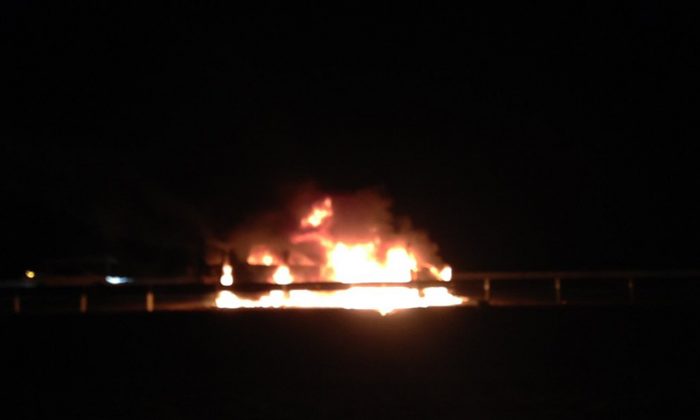 A small bus on fire which was carrying foreign and Russian journalists, and activists from a non-governmental organization, is seen after been attacked near the border of Chechnya by men in Ingushetia, South Russia, Wednesday, March 9, 2016. A group of men attacked the small bus, beating the journalists and activists inside and set the vehicle on fire. Two of the journalists and the bus driver have been hospitalized. (Russian media organization Mediazona via AP)
Europe

Reporter Escaped From Bus Attack Near Chechnya Just in Time

MOSCOW— A Norwegian reporter who was among a group of journalists and activists attacked by masked assailants near Chechnya said he escaped from the group’s minibus only seconds before it exploded into flames.

Oystein Windstad of the Ny Tid weekly told The Associated Press on Thursday that the men who ambushed the bus had dragged others off the vehicle, some by the hair, but that he resisted.

“I resisted going out of the bus because I thought: OK, if I’m out on this country road somewhere in the Caucasus, this is your death. You’re finished, this is your death,” Windstad said from a hospital in Ingushetia, just over the border from Chechnya.

When he saw the assailants weren’t looking at him for a moment, he jumped out through a window.

Windstad and Maria Persson Lofgren of Sweden’s public radio were traveling with four Russian journalists and two activists of the Committee to Prevent Torture when the attack occurred Wednesday evening near the settlement of Ordzhonikidzevskaya. They were on a several-day media tour to investigate claims of widespread human rights abuses in Russia’s North Caucasus republics.

I ran toward a dark field and I few seconds after I jumped out of the car, the whole bus exploded.
— Oystein Windstad

Lofgren told Swedish Radio that she was beaten, and needed 10 stitches in her thigh after she was thrown onto an iron beam by the roadside. She was also heavily bruised on her arms and legs.

Windstad said two of his teeth were broken and he got stitches under his eye, on his chin, a foot and a knee.

Chechnya is under the control of strongman president Ramzan Kadyrov, who is intolerant of dissent and heads a private security force that critics accuse of brutality.

The Committee to Protect Journalists blamed Russian authorities’ inattention to anti-media hostility in Chechnya as enabling the attack.

Committee to Prevent Torture member Oleg Khabibrakhmanov said there have been two other attacks on their organization recently.

“The attack follows a burst of menacing comments on social media and in the press … by government officials in Chechnya,” a CPJ statement said. The assault “was enabled by the government’s inaction in the face of overt hostility to the press.”

“I thought it was some kind of accident, but then a number of young men with masks jumped out with sticks, with which they broke the windows and started beating the Chechen driver of the bus,” Lofgren said.

Kremlin spokesman Dmitry Peskov told reporters that the attack “is absolutely outrageous, absolute hooliganism … and this is totally unacceptable.”