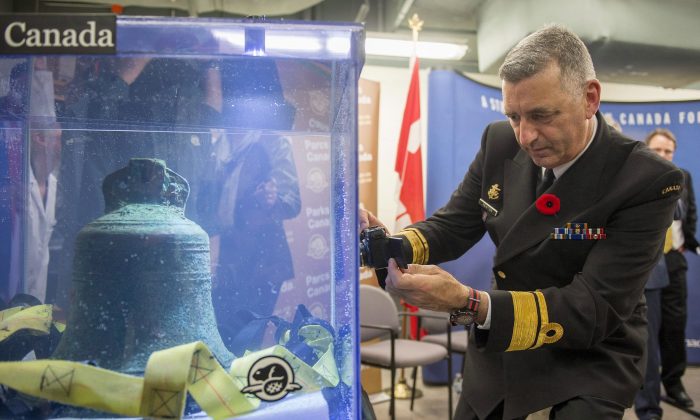 Royal Canadian Navy Rear Admiral John Newton takes a picture of the bell from the Franklin Expedition shipwreck HMS Erebus in Ottawa on Nov. 6, 2014. Prize-winning journalist Paul Watson has quit his job at the Toronto Star, accusing the newspaper of suppressing a story about last year's successful search for the Erebus in the Canadian Arctic. (The Canadian Press/Justin Tang)
Canada

No truth to the allegations, says Star's publisher
By The Canadian Press
biggersmaller
Print

TORONTO—Pulitzer Prize-winning journalist Paul Watson said Wednesday, July 8, that he quit the country’s largest newspaper so he could get the truth out about last year’s successful search for Sir John Franklin’s lost ships in the Canadian Arctic.

In a blog post, Watson said he submitted his resignation at a meeting July 7 in Vancouver with Toronto Star editors over “the newspaper’s refusal to publish a story of significant public interest,” an allegation the Star denied.

Watson said resigning was the only way he could resume that reporting and fulfill his responsibilities as a journalist.

“My reporting is an attempt to give voice to federal civil servants and others involved in the gruelling, High Arctic search for British Royal Navy explorer Sir John Franklin’s lost ships, HMS Erebus and HMS Terror,” Watson wrote.

“For months, these individuals have been angry at what they consider distorted and inaccurate accounts of last fall’s historic discovery of Erebus in the frigid waters of eastern Queen Maud Gulf.”

A “peripheral” member of the expedition, who he said has access to Prime Minister Stephen Harper’s office as well as editors at the Star, was the source of those accounts, he alleged.

Watson did not respond immediately to a request for comment. However, he told the website Canadaland that the Star ordered him six weeks ago to stop reporting on the story—which he called a “gag order.”

In an internal email to the paper’s employees Wednesday, July 8, Star publisher John Cruickshank dismissed Watson’s allegations that the Prime Minister’s Office had a hand in persuading the Star to “constrain his reporting.”

“Let me publicly deny this extremely odd idea,” Cruickshank said. “There is no truth whatever to the suggestion.”

It’s time. No more fear. Stand up for the people being silenced and give them voice.
— Reporter Paul Watson

He also said resignations are regarded as an internal matter, but added the Star regrets Watson’s decision to resign suddenly and to “provide inaccurate information about the Star’s role in his decision.”

Watson wouldn’t give Canadaland all the details of what inaccuracies his sources were alleging, saying he wants to “get this story nailed down from all corners” before he offers it to another outlet for publication.

“It’s time. No more fear. Stand up for the people being silenced and give them voice,” Watson said on his blog. “That’s the only way we’ll take our democracy back.”

The Prime Minister’s Office had little to say about Watson’s allegations, but said in an email that the government was “proud to join partners from the scientific, research, and business community, in addition to Inuit, to announce the discovery of one of the two ships belonging to the Franklin Expedition.”

Harper himself announced last year that the Canadian search team found the wreck of one of two lost ships from Franklin’s doomed 1845 expedition to find a Northwest Passage. A few weeks later, he personally announced the ship was HMS Erebus.

The Conservatives have made Arctic sovereignty a key theme since coming to power in 2006. Harper said last year the Franklin search was part and parcel of asserting Canada’s control over its North.

Watson’s biography on the Star website was changed Wednesday to make clear he reported for the paper “until July 2015.”

The Canadian Press is jointly owned by the parent companies of the Toronto Star, the Globe and Mail, and Montreal’s La Presse.