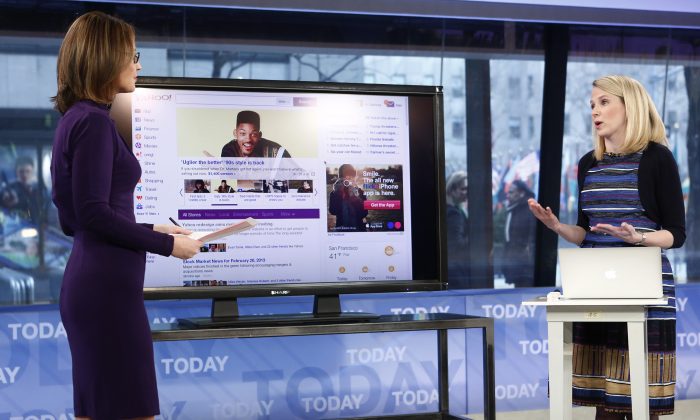 NEW YORK—Yahoo is at a crossroad. The company has ample cash on its balance sheet and large non-stratetic investments in Asian internet companies, but lacks growth in domestic add-sales and mobile computing. CEO Marissa Mayer was brought in from Google to turn around the company in 2012.

As the technology news site All Things D. reports, Mayer is about to shift gears in the transformation of Yahoo. The company is about to buy out Tumblr, one of the hottest content-sharing sites on the internet in a deal worth about $1.1 billion.

The Sunnyvale, Calif., company’s board of directors will meet Sunday evening to consider approving the acquisition of online content-sharing site Tumblr in a deal Mayer negotiated, according to  All Things D. The story posted late Friday cited anonymous sources.

If Yahoo Inc.’s board signs off, the deal could be announced Monday.

In an invitation sent Friday, Yahoo promised to unveil “something special” Monday evening in New York. The event is being held in a Times Squares lounge located about two miles from Tumblr’s headquarters.

Buying Tumblr would fulfill Mayer’s goal of reaching a wider audience on smartphones and tablet computers.

Tumblr serves up a constantly changing collage of stories, photos and other digital content served up by users who are increasingly connecting to the service through its mobile applications. The service is also one of the hottest sites among teens and young adults, a demographic that Mayer, 37, thinks Yahoo needs to do a better job of reaching.

It would also be a good use of the company’s vast amount of cash and resources. The company reported cash of $6 billion at the end of 2012 and still has a 24 percent stake in Alibaba, a Chinese e-commerce site. Barclay’s capital values the stake at $16.8 billion.

The investment has paid huge dividends for Yahoo, but it is non-strategic and Yahoo has already announced it would ultimately divest it and use the cash to turn around the core business.

If it’s completed, the Tumblr deal would be Mayer’s biggest coup — and, at the same time, the biggest risk — since she ended her 13-year career as a key executive at Google Inc. to try to snap Yahoo out of a prolonged malaise that had demoralized employees and investors alike.

Since her arrival, Mayer has been focused on redesigning several Yahoo services and bringing in more mobile engineering talent, primarily by buying a series of small startups.

None of those previous acquisitions have required Yahoo to dip too deeply into its bank account. Late last year, Yahoo paid a total of $7 million for two startups called OnTheAir and Stamped. In the first three months of this year, Yahoo snapped up three more startups for a total of $10 million, according to the company’s regulatory filings.

Tumblr, founded in 2007 by its CEO David Karp, presumably would become a pivotal part of Mayer’s effort to sell more advertising.

Mayer has been winning back investors, even though the company’s revenue is still lagging the overall growth of the booming Internet and mobile advertising market. Yahoo’s stock price has risen 69 percent under Mayer’s leadership.

Barclay’s analysts have a $29 price target and think Mayer has a good chance of succeeding.

“Yahoo!’s current valuation appears relatively attractive …, due largely to the value of its Asian assets (Alibaba Group
and Yahoo! Japan). We believe … the potential for Alibaba monetization, and a new strategic direction under Marissa Mayer could be positive catalysts for shares,” the analysts write in a note to clients.