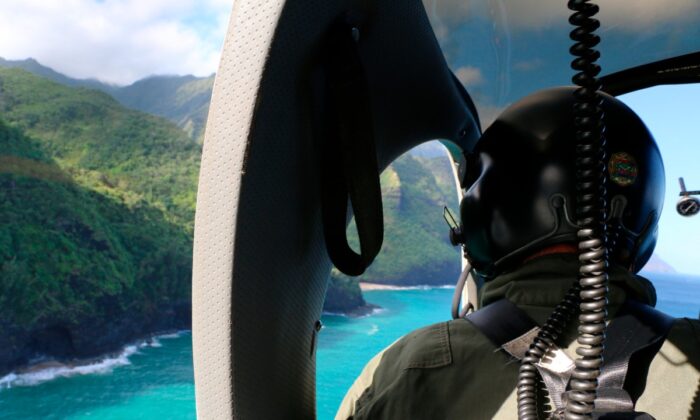 A person who was near a remote Hawaii site where a tour helicopter crashed and killed seven people last month told investigators that visibility was only about 20 feet at the time because of fog and rain, according to a preliminary accident report released on Jan. 15.

The unidentified person was on a hiking trail Dec. 26 in Koke’s State Park on Kauai island and described hearing a hovering helicopter followed by a high-pitched whine, the National Transportation Safety Board report said.

The person was about 1.5 miles away from the remote mountain ridge where the helicopter went down. The witness tried to look for the helicopter but could not because of the weather conditions and fading daylight, the report said.

The NTSB report also said that the helicopter’s pilot was on his eighth and final scheduled 50-minute tour flight of the day. The report said the company operating the flight, Safari Aviation Inc., doing business as Safari Helicopters, was following procedures for visual flight rules.

The pilot, Paul Matero, did not have an instrument rating, which allows pilots to fly at night and in bad weather relying entirely on the helicopter’s flight instruments, according to the Federal Aviation Administration.

A lawyer who has handled several helicopter crashes in Hawaii told The Associated Press shortly after the crash that the nature of helicopter tours require them to fly by visual flight rules.

“Most of the pilots that fly tour helicopters in Hawaii either don’t have an instrument rating or their instrument rating isn’t current,” said Ladd Sanger, the Texas-based aviation attorney and helicopter pilot. “When you have dynamic weather conditions, where you have clouds and winds, it might be more prudent not to fly in those conditions.”

Instrument-only tours would require a flight plan and altitude that would not be conducive to sightseeing, Sanger said.

Officials have said the helicopter hit a ridge at an altitude of 3,003 feet then fell about 100 feet. The report said the wreckage was consumed by fire.

The NTSB report said the closest official weather station, about 9 miles southwest of the crash site, reported rain and clouds moved in during the time between last contact with the pilot and when it crashed. About 30 minutes after that last radio transmission with the helicopter, the weather station reported overcast clouds at 3,000 feet with wind and rain.