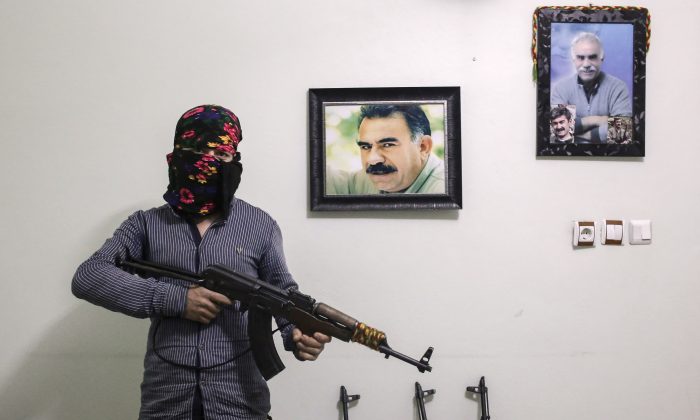 A member of a armed group Patriotic Revolutionary Youth Movement (YDG-H), a youth division of the Kurdistan Workers' Party (PKK), with his AK-47 next to a pictures of the jailed Kurdish rebel leader Abdullah Ocalan in a house in southeastern Turkish city of Nusaybin, Turkey, on Feb. 25, 2016. Since mid-December, the Turkish security forces placed to several predominantly Kurdish cities in Turkey under 24-hour martial law and curfew on the premise of restoring public order. (Cagdas Erdogan/Getty Images)
Middle East

The agency said the offensive targeted five areas in northern Iraq, including the Qandil mountains on the Iraq-Iraq border where the PKK’s leadership is based.

Turkey’s jets have frequently bombed PKK sites in northern Iraq since July, when a fragile peace process between the government and rebels collapsed.

The PKK, which is fighting for autonomy for Kurds in Turkey’s southeast, is listed as a terrorist organization.