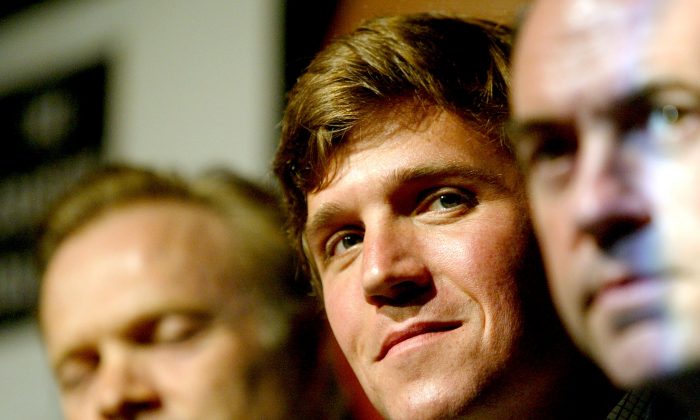 Following Megyn Kelly’s departure from Fox News, it appears that Tucker Carlson, whose show has shot up in popularity—especially on YouTube—will get her coveted spot.

The Drudge Report, in an exclusive, reported on Thursday morning that “Fox News executives will announce Tucker Carlson replaces the vacating Megyn Kelly” for her 9 p.m. time slot. “The dramatic move caps Carlson’s rapid rise at the nation’s top-rated cable channel,” it said, describing him as the new “Cable King.”

Fox chief Rupert Murdoch later issued a statement to Politico. “In less than two months, Tucker has taken cable news by storm with his spirited interviews and consistently strong performance,” said Murdoch. “Viewers have overwhelmingly responded to the show and we look forward to him being a part of Fox News’ powerful primetime line-up.”

Carlson, 47, had previously anchored shows on PBS, MSNBC, and CNN. On Fox, his show replaced Greta Van Susteren, and his show would do as well as Fox’s primetime shows.

He also helped start conservative media website The Daily Caller, where he served also as editor-in-chief and wrote opinion pieces.

Martha MacCallum will follow Carlson at 7 p.m., according to Fox, anchoring a program called “The First 100 Days,” which will detail the first 100 days of the incoming Trump administration.

Kelly confirmed on Facebook and Twitter that she would be leaving Fox for NBC News, where she’ll be anchoring a daytime news show, a lengthy Sunday show, and special and large-event broadcasting for the network.

Mediaite reported that Kelly was offered a $100 million package from Fox News to stay at the network, where her show was second in ratings to Bill O’Reilly’s show. The offer came directly from Lachlan Murdoch, Executive Co-Chairman of News Corp and 21st Century Fox.

“While I will greatly miss my colleagues at Fox, I am delighted to be joining the NBC News family and taking on a new challenge. I remain deeply grateful to Fox News, to Rupert, Lachlan and James Murdoch, and especially to all of the FNC viewers, who have taught me so much about what really matters. More to come soon,” she said on her Facebook page.