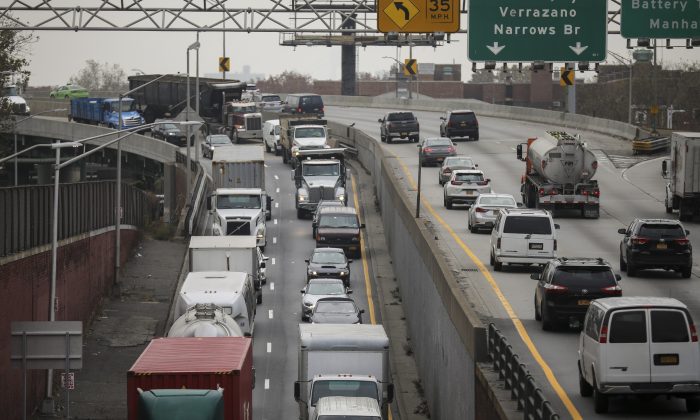 Traffic moves along the Brooklyn-Queens Expressway in New York on Nov. 20, 2018. (Drew Angerer/Getty Images)
US News

Report: Transit Agencies May Turn to Taxpayers for More Money When COVID-19 Funds Dry Up

Transit agencies could turn to taxpayers for more money when federal COVID-19 money runs out.

With federal money dwindling, some mass transit agencies are preparing to seek more tax dollars at a time when fewer people are riding, according to a report from a credit rating agency.

Some workers never plan to return to the office, creating uncertainties for mass transit agencies and the taxpayers who fund them, especially those more dependent on riders for fare revenue. A new report from S&P Global Ratings said transit systems could seek additional tax dollars when federal COVID-19 money runs dry in 2025.

The federal government gave transit agencies $71.7 billion in four relief packages in response to the COVID-19 pandemic, according to the report. Many agencies have used that money to stay afloat as fare revenue plummeted along with ridership.

Ridership recovery could take time. S&P estimated public transit agencies would get about 60 percent of pre-pandemic ridership back by the end of 2022 and about 70 percent to 75 percent by the end of 2025, according to the report.

“In short, we do not expect a full recovery and believe mass transit operators will have to adjust operations (service levels, headcount and routes) to achieve structural balance due to a materially weakened ridership base,” according to the latest S&P report on the transit sector.

Some transit systems could consider tax initiatives, according to the report. Generally, attempts to cut costs have not kept up with the loss in farebox revenue, the report stated.

“Although near-term risks remain, we generally expect mass transit providers will adapt operations to match demand as we emerge from the pandemic,” according to the report. “Some are pursuing tax initiatives to achieve structural balance.”

The Legislature in the state of Washington passed a measure in March 2022 that allows Sound Transit to create specific zones that would tax targeted communities to pay for additional transit services. The law allows the transit agency to create “enhanced service zones” where voters in that area would be able to approve additional taxes to pay for proposed enhancements.

The S&P report notes a McKinsey’s American Opportunity survey found about 58 percent of Americans—or about 92 million people—can work from home at least once a week. Eighty-seven percent of those who can work from home said they plan to do so. And 68 percent of U.S. workers said they would look for a new job if required to return to the office full-time, according to a 2021 survey by payroll provider ADP. The S&P report said if those who can work remotely continue to do so it could “indicate a sustained loss in ridership of 17 percent if workers return to the office two days a week, or 11 percent if they go back three days a week.”

Transit agencies will have to adjust to changing ridership trends and that could include service cuts.

Trouble could be ahead for agencies that are unable to make changes.

“A fiscal cliff looms once federal stimulus aid is depleted if operators are unable to right-size operations at lower expected ridership levels,” according to the report.

Although fewer people are using public transit, it has remained popular with voters. Voters passed 81 percent of the 150 ballot initiatives put forward from 2018 to August 2022 for $42.9 in revenue for public transit operations and infrastructure investment, according to American Public Transportation Association data included in the S&P report. But it remains unclear how long that support will last.

“One longer-term question is whether local or regional taxpayers who increasingly do not use mass transit will continue to view it as an important public service worthy of financial support,” the report said. “Only 54 percent of transit ballot initiatives have passed year-to-date in 2022, a material decline from previous years when more than 80 percent passed. This could indicate voter support is waning, although this might also be attributable to depressed ridership levels, weakening economic conditions and high inflation.”

By Brett Rowland and Tom Gantert