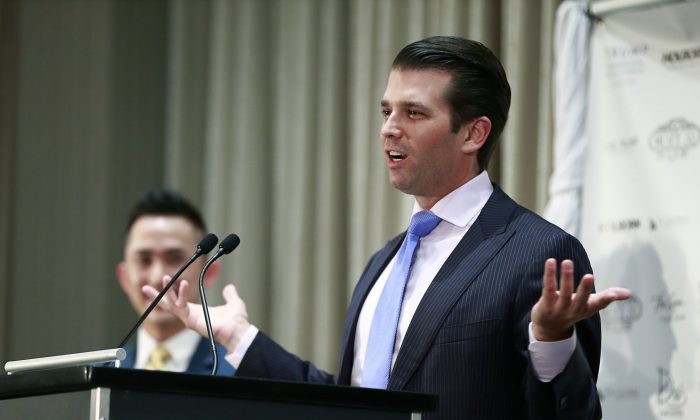 Donald Trump Jr. delivers a speech during a ceremony for the official opening of the Trump International Tower Hotel in Vancouver, Canada on Feb. 28, 2017. (Jeff Vinnick/Getty Images)
US News

A report says that the substance that was placed inside a letter sent to Donald Trump Jr., requiring his wife to be sent to the hospital, is cornstarch.

Law-enforcement sources told the New York Post that the letter contained the harmless food product. Other media outlets reported that corn starch was placed in the letter, postmarked from Boston.

Vanessa Trump opened the envelope at 10 a.m. on Feb. 12, at the Manhattan home that belongs to her mother.

She was later taken to New York-Presbyterian Hospital as a precaution, along with her mother and another person who was not identified.

Trump Jr. tweeted Monday that his wife and children were “safe and unharmed” following the incident. “Truly disgusting that certain individuals choose to express their opposing views with such disturbing behavior,” he tweeted, describing the matter as “incredibly scary.”

President Trump’s personal lawyer, Michael Cohen, also told the Post: “How disturbed must a person be to do what they did to a mother of five young children? This dangerous and reckless act goes beyond political differences.”

“I know the president spoke with her (Vanessa). Beyond that at this point, it’s an ongoing and active investigation so I can’t comment any further,” noted White House spokeswoman Sarah Huckabee Sanders.

Thankful that Vanessa & my children are safe and unharmed after the incredibly scary situation that occurred this morning. Truly disgusting that certain individuals choose to express their opposing views with such disturbing behavior.