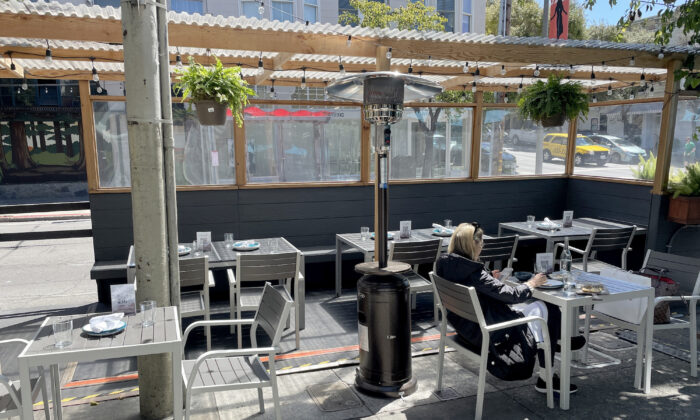 A lone customer sits in outdoor seating a restaurant in San Francisco, Calif., on May 11, 2022. (Justin Sullivan/Getty Images)
Inflation

A new report from marketing insights firm Acosta shows that consumers are feeling the bite of inflation and are responding by dining out less or choosing more affordable restaurants and meal options.

In its foodservice-specific research report based on online surveys of shoppers, Acosta found that 54 percent of U.S. consumers were dining out less frequently due to inflation.

“Consumers are feeling the pinch of inflation and reacting accordingly. To continue participating in dining out activities, many are sharpening their focus on costs,” Travis King, President of CORE Foodservice, a sales agency that partners with Acosta, said in a statement.

About one-third of polled consumers said higher prices were driving them to spend less, including by ordering less expensive menu items, opting for cheaper restaurants, or hunting for deals.

Americans who dine out are also becoming more choosy about prices. While food quality remained the most important factor when choosing a restaurant, meal price has risen in importance, especially among the “fast casual diner” segment.

Among fast casual diners, considerations around meal price (41 percent) rose six percentage points between this edition of the survey and the last, displacing menu variety (38 percent) to take the second spot after food quality (53 percent).

Consumer interest in dining out remains “stronger than expected during an inflationary period,” King said, attributing the demand to higher reliance on foodservice as employees return to offices in greater numbers.

“But inflation’s tipping point is yet to come,” King said, suggesting it would take some time before the current run of elevated price pressures dissipates and predicting that service quality will grow in importance to attract people to restaurants.

“Providing a valuable dining experience will be critical to incentivize cost-wary consumers in the coming months,” he said.

Acosta’s report comes on the heels of a survey last week from Northwestern Mutual that found inflation to be the single biggest obstacle to reaching financial security in retirement, while 65 percent of U.S. adults said they don’t expect inflation to subside in 2022.

Consumer price inflation has been running at a 40-year high, rising faster than wages and eroding the purchasing power of many U.S. households.

Americans were increasingly dipping into their savings to cope with higher prices, Northwestern Mutual said in its report, noting that average personal savings dropped by 15 percent from 2021 to 2022.

Just 43 percent of U.S. adults said they believe the U.S. economy is strong, which comes amid growing talk among experts and executives about the likelihood of a looming recession.

Consumer confidence, which serves as a barometer of consumer spending trends, fell in May to its lowest level since 2013, according to the latest data from the University of Michigan’s survey of consumer sentiment.

Consumer spending is a key driver of the U.S. economy, accounting for around two-thirds of output.