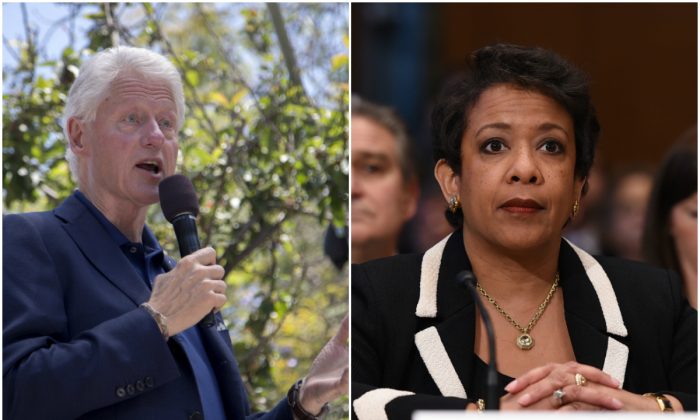 “Nobody knew this was coming,” the source told the New York Observer in an exclusive interview. The person, who works in Lynch’s security detail, wouldn’t reveal their name or gender.

“We just knew to be aware there were other events going on. There was no planned meeting. It was just chance contact,” the source told the Observer. “The fact is, he just started walking over. I don’t think it was pre-arranged. He just started walking over and [even her security] can’t tell him, ‘you can’t do that.’ He walked in her plane for at least 20 to 25 minutes and the FBI is standing face to face with the Secret Service and just chatting on the hot tarmac like, ‘what the hell.'”

Clinton Interviewed by the FBI About Private Email Server

The Observer is a weekly publication owned by Jared Kushner, the son-in-law of Donald Trump. For his part, Trump described the meeting as “horrible.”

Hillary Clinton is being investigated by the FBI for her alleged program to carry out her electronic correspondence as secretary of state via a private email account housed at private server in her New York home.

The source told the weekly that the original plan for airport and security officials was for Clinton’s plane to take off before Lynch’s plane, so as to not create a sort of congestion among security officers guarding Clinton and Lynch. The two jets were about 75 yards apart on the tarmac, the person said. “We have a procedure we do to clear [space for] a motorcade. As we were ready to receive her, I saw the other motorcade coming in—we were like, ‘great timing,'” the person said, adding they were being sarcastic in noting the “great timing.”

The source said, “Then I see Clinton walking over. His detail guys ran over to hers and said he’s coming. ‘He’s closing.’ He walked straight there to the Air Force guy at the door and next thing I know he’s going up the steps [of her plane].”

The source noted that he doesn’t agree with the politics of President Obama or Lynch or the Clinton family. However, they stipulated that they were just doing their job.

They said: “I knew from the beginning that [Lynch] got caught off guard and her staff was already talking about it that it’s going to be a political problem for her. Her staff was flipping out. We didn’t think about the political part until we saw her staff flipping out. For the security guys, it was more of a ‘I’ve got armed guys coming into my perimeter’ problem. But the staff guys saw right away that it was a political problem. After Clinton got off, they were like, ‘that wasn’t good.’ And I know from others who were in the actual car with her that her people knew immediately the political ramifications of it and were very upset.”

The person said they didn’t consider the political ramifications, but more the timing of the encounter, as “we had other things to do.”

“He [Clinton] came off and shook the hands of the heads of Lynch’s detail. Then her detail finally got her off the plane, now much delayed, and departed for her day’s events. She had a series of visits planned for Tuesday,” they said.

It was reported by CNN that Clinton’s conversation with Lynch was not planned and social in nature—rather than about the investigations.

Lynch agreed, saying that she “wouldn’t do it again” because she believed it “cast a shadow” into the Justice Department’s investigation of Clinton’s email server.

Conservative legal watchdog group Judicial Watch said in a statement that there should be an investigation into the meeting between Clinton and Lynch.

“Attorney General Lynch’s meeting with President Clinton creates the appearance of a violation of law, ethical standards, and good judgment,” the group stated. “Attorney General Lynch’s decision to breach the well-defined ethical standards of the Department of Justice and the American legal profession is an outrageous abuse of the public’s trust.”

It added that the incident undermines the public’s faith and creates an impression that “the fix is in.”