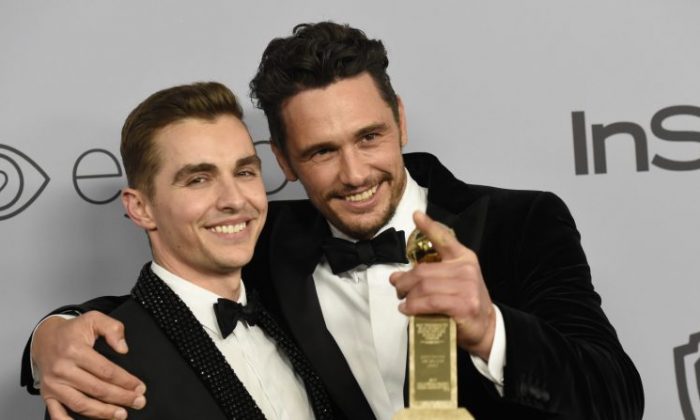 Dave Franco (left), poses with James Franco, winner of the award for best performance by an actor in a motion picture - musical or comedy for "The Disaster Artist," at the InStyle and Warner Bros on Jan. 7, 2018. (Chris Pizzello/Invision/AP, File)
Entertainment News

“How could a person publicly stand by an organization that helps to provide support for victims of sexual assault while privately preying on people who have no power?” said Johansson, according to the Daily Mail.

It’s believed that Johansson, who ranked second on the 2015 World’s Highest-Paid Actress list, was referring to Franco, who has been accused of sexual misconduct and harassment by multiple women. He wore a Time’s Up pin at the Golden Globes.

Franco, for his part, has denied the allegations.

A representative for Johansson said that she was referring to Franco, the New York Daily News reported.

Johansson was one of the 300 Hollywood women who signed the Time’s Up coalition’s open letter that alleges there is rampant sexual harassment in workplaces.

However, some people criticized Johansson for having starred in several Woody Allen films. Allen has been accused of molesting his daughter, Dylan Farrow.

Yes, this is the same Scarlett Johansson who starred in three Woody Allen films and said of the accusations against him: “It’s all guesswork.” https://t.co/yMmDPXKD22

In a recent interview, Farrow accused Allen of abuse for the first time on TV.

“I want to show my face and tell my story,” Farrow told “CBS This Morning” last week. “I want to speak out. Literally.”

“With so much silence being broken by so many brave people against so many high profile people, I felt it was important to add my story to theirs because it’s something I’ve struggled with for a long time and it was … it was very momentous for me to see this conversation finally carried into a public setting,” she said.

Allen has denied the allegations, saying that his ex-wife and Farrow’s mother, Mia Farrow, coached Dylan Farrow during a custody battle.

Allen, 82, told ABC last week: “When this claim was first made more than 25 years ago, it was thoroughly investigated by both the Child Sexual Abuse Clinic of the Yale-New Haven Hospital and New York State Child Welfare. They both did so for many months and independently concluded that no molestation had ever taken place. Instead, they found it likely a vulnerable child had been coached to tell the story by her angry mother during a contentious breakup.