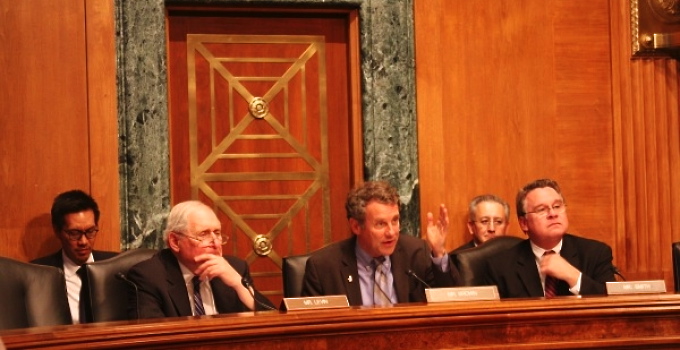 The Congressional-Executive Commission On China. Pictured is a committee hearing on Chinese Hacking: Impact on Human Rights and Commercial Rule of Law June 25, 2013. (CECC)
China

A congressional committee’s report to Congress highlights the People’s Republic of China’s need to ratify an important human rights agreement, while discussing negative impacts on U. S. citizens caused by abuses of human rights and the rule of law in China. The report also discusses the rights of women and examines the Chinese regime’s perennial human rights failures in other areas.

“Amid talk of a new round of economic reforms under President Xi Jinping, this year’s report serves as an important reminder that China is no closer to granting its citizens basic human rights than when China entered the World Trade Organization nearly 12 years ago,” said Senator Sherrod Brown (D-OH), Co-Chairman of the Congressional-Executive Commission On China (CECC), while announcing the new report.

“Chinese citizens still do not enjoy the freedoms of expression, assembly, and religion to which they are entitled under international law,” Brown said in his statement upon the report’s release.

Though China has repeatedly promised to ratify the International Covenant on Civil and Political Rights (ICCPR), the nation is the only permanent member of the UN Security council which has not officially ratified it.

This year’s CECC report calls attention to the regime’s failure to ratify the covenant, which it signed 15 years ago, and strongly recommends that it be held to task by Congress and the Administration.

The PRC’s Universal Periodic Review before the UN Human Rights Council is slated for Oct. 22, and the Commission recommends that Congress and the Administration take the occasion of that and future meeting to urge China to take substantive steps on conforming with ICCPR provisions.

China’s adherence to rule of law and international human rights standards are connected to the health and economic prosperity of Americans through international trade, raising concerns about the effect of China’s neglect of human rights on U.S. citizens, the report says.

The report points out that in China food continues to be grown in areas contaminated by water and soil pollution, and pollutants originating in China, such as mercury and ozone, are reaching the United States.

Without a free press, the Chinese public “cannot effectively uncover and respond to food and drug safety issues, environmental threats, and disease outbreaks that could be exported abroad,” warned the report.

Going on to address workplace and trade issues, the report says the PRC continues to contravene its obligations as a member of the WTO, causing direct harm to American businesses and workers. By not adhering to WTO obligations and by not protecting citizens’ human rights in the workplace, the safety and quality of Chinese export goods are often inadequate, and the ability of American workers and companies to compete on a level playing field is severely impaired.

“In the strongest terms used to date, this report underscores the abuse of women and the draconian repressive policies which remain firmly in place, such as the one-child policy which has involved egregious abuses such as forced abortions and forced sterilizations” said Chris Smith (R-NJ), Co-Chairman of the Commission, in his introductory statement.

Citing this and other policies as the source of great public discontent in China, the report again this year addresses the reeducation through labor system, population planning policy, and the household registration system. The regime has promised reform in these policies, the report says.

Examining China’s current policy toward ethnic minorities, particularly the Tibetans and Uyghurs, the report finds that China’s approach has proven ineffective and counterproductive, and points to Tibetan self-immolations and Xinjiang violence as evidence.