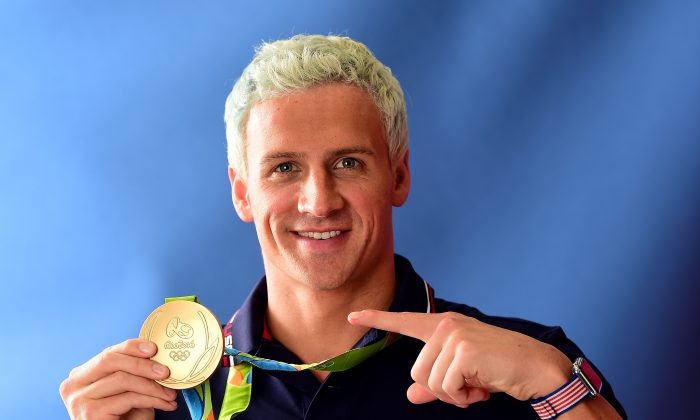 Swimmer, Ryan Lochte of the United States poses for a photo with his gold medal on the Today show set on Copacabana Beach in Rio de Janeiro, Brazil on Aug. 12, 2016. (Harry How/Getty Images)
Entertainment

Report: Ryan Lochte Could Join ‘Dancing With The Stars’

Olympic swimmer Ryan Lochte might trade in his swim wear for dancing shoes to join the cast of “Dancing With the Stars,” according to ESPN.

Sources told the sports website that the 12-time medalist was in talks with ABC executives to join the dancing competition show prior to the Summer Games and was in continued talks shortly after the closing ceremony.

“Sources said negotiations proceeded so smoothly last week that Lochte was a virtual shoo-in to be on the 23rd season of the show, which begins Sept. 12,” reported ESPN.

Last week it emerged that Lochte had lied about a gunpoint robbery during the Rio Olympics. According to Brazilian police the robbery never occurred, but instead Lochte and his teammates—James Feigen, Jack Conger, and Joseph Guntz—drunkenly vandalized a gas station restroom.

Since the fallout, the embattled swimmer has continuously apologized for his actions.

First he took to Instagram on Aug. 19 to apologize, where he wrote, “I wanted to apologize for my behavior last weekend—for not being more careful and candid in how I described the events of that early morning and for my role in taking the focus away from the many athletes fulfilling their dreams of participating in the Olympics.”

The following day, in an interview with “Today,” Lochte confessed that he “over-exaggerated the story.”

He also apologized to his teammates in an Aug. 21 interview with People magazine, including to offer to foot the $11,000 fine James Feigen was ordered to pay by a Brazilian judge.

Lochte could still face repercussions from the Olympic Committee.

“The behavior of these athletes is not acceptable, nor does it represent the values of Team USA or the conduct of the vast majority of its members,”Scott Blackmun, the US Olympic Committee’s CEO said. “We will further review the matter, and any potential consequences for the athletes, when we return to the United States.”

Tune into “Good Morning America” on Aug. 30 for the announcement of the “Dancing With the Stars” cast.