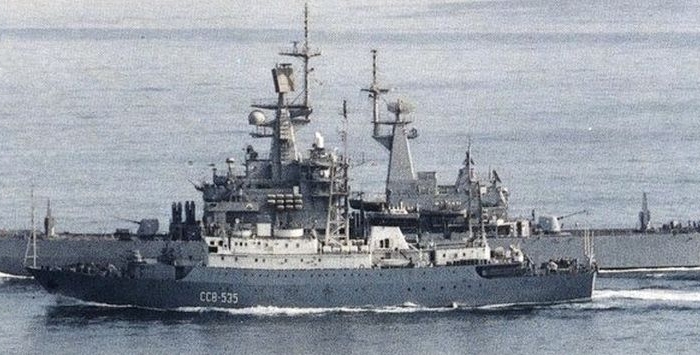 A Russian spy ship was seen on Feb. 15 about 30 miles off the shores of the United States—around 40 miles closer than the previous day—near a Navy submarine base in Connecticut.

A U.S. official told Fox News that the ship was found 30 miles south of Groton, Conn., but it stayed in international waters. The territorial boundary extends about 12 miles from the coast of the United States.

The ship, meanwhile, was “loitering” in the water, the official added to Fox News, which broke the story. Though it is armed with surface-to-air missiles, the ship is mainly designed to collect data and intercept communications.

According to the official, it’s the farthest north the ship, known as the Viktor Leonov, had ever traveled up the east coast of the United States.

Pentagon officials noted that the Russian ship will sail south along the East Coast and head back to the Caribbean.

As CBS News reported, the ship is currently off the coast of Delaware in international waters, and it’s expected to go north until it reaches a submarine base in New London, Connecticut, before turning around.

The broadcaster noted that in 2015, a Russian spy ship was found near a spot where transatlantic cables are laid down.

Four days ago, a Russian patrol plane buzzed the USS Porter, followed by two Russian jet fighters, and then a third. The fly-bys, according to American officials, were deemed “unsafe and unprofessional.”

It was the first time Russian planes flew by a Russian U.S. warship since President Donald Trump took office.

Moscow also ordered the deployment of a ground-based nuclear-capable weapon inside Russia’s borders.