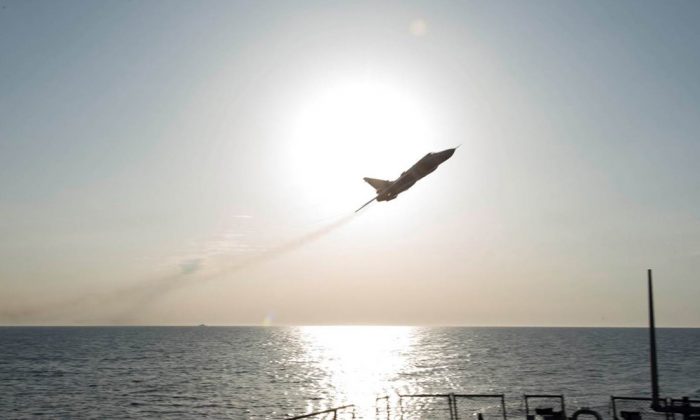 A U.S. destroyer in the Black Sea was buzzed by four Russian military jets last week, it was reported on Tuesday.

“There were several incidents involving multiple Russian aircraft,” said Navy Capt. Danny Hernandez. “They were assessed by the commanding officer as unsafe and unprofessional.”

Involved in he flyby were two Su-24 jet fighters, then a single Su-24, and finally an IL-38 transport aircraft.

The planes were flying at unusually low altitudes and at high speeds, Hernandez noted. “These incidents are always concerning because they could result in miscalculation or accident,” he said.

It’s the latest Russian military provocation as the Trump administration attempts to grapple with how it will deal with the Kremlin.

Russian Fighter Jet Flies Within 10 Feet of US Navy Aircraft

This month, President Donald Trump told Fox News that while he respects Russian President Vladimir Putin, it “doesn’t mean I am going to get along with him.”

Right before Trump took office, the Obama administration issued sanctions against Russia and expelled dozens of diplomats over allegations that Moscow interfered in the election—which Russia has denied.

“No it doesn’t. From what I understand, it is a regular course of action,” Spicer said.