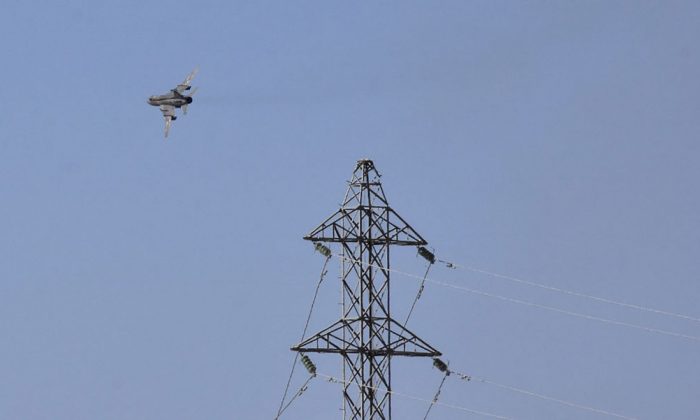 A fighter jet flies over the eastern Syrian city of Deir Ezzor on September 11, 2017 as Syrian government forces continue to press forward with Russian air cover in the offensive against ISIS across the province. Syrian army reinforcements arrived in Deir Ezzor for a new push against the Islamic State. (George Ourfalian/AFP/Getty Images)
Middle East

At least 53 civilians have been killed in Russian air strikes in a village in east Syria, according to a Syrian monitoring group.

Twenty-one or more of those killed on Sunday, Nov. 26 were children, the UK-based Syrian Observatory for Human Rights (SOHR) told AFP.

The air strikes reportedly hit the village of al-Shafah in Deir ez-Zur, one of the last provinces where ISIS still has territory. The terrorist group has been pushed out of its main stronghold in Raqqa.

Rami Abdel Rahman of SOHR told AFP that the death toll had increased after debris was removed when carrying out rescue operations.

He said the strikes had hit residential buildings in the village, which is on the eastern bank of the Euphrates River.

There have been no other reports to confirm civilian deaths.

Russia’s Defence Ministry said that six long-range bombers had targeted ISIS and “terrorist strongholds” in the area around the time of the reported civilian deaths, according to Al Jazeera.

Russia has been an ally of Syria’s President Bashar al-Assad since 2015, along with Iran.

The United Nations is starting peace talks in Geneva on Tuesday, Nov. 28 in an attempt to find a solution to the war, which has so far claimed more than 400,000 lives.

Russia previously vetoed a U.S.-drafted resolution that would have renewed an international inquiry into who is to blame for chemical weapons attacks in Syria.

But President Trump and President Putin did issue a joint statement that enhanced de-conflicting efforts, such as increased communications between Russian and U.S. militaries, have proven successful and will continue until ISIS is defeated.