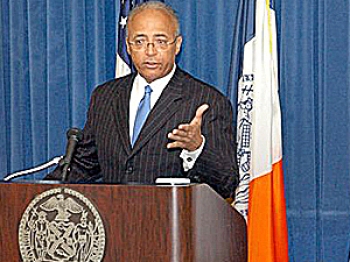 In the report, the audit criticized the Department for the Aging (DFTA) for failing to properly maintain suitable conditions for many of the 20 senior centers out of the 329 in New York City that were sampled in the audit. Among the 20, problems such as exposed wiring, poorly lit stairways, broken handrails, protruding pipes and damaged asbestos-pip insulation were prominent.

“Simply stated, DFTA’s lack of follow up is putting seniors at risk for injury,” said Thompson.

Thompson said he found it “mind-boggling” that the problems uncovered by his office were similar to those cited by the DFTA in an annual assessment.

“We were provided with little evidence of any efforts on its part to work with center management and landlords to correct these problems,” said Thompson.

Of the problems found by the auditors, the most prominent involves poorly illuminated or blocked exits. The audit reported that 12 centers had blocked exits such as in the New York Chinatown Senior Center where the exit was blocked by trash bags. Garbage bags were also found to have blocked the exit of the Jackie Robinson Senior Center. In the Chinatown center, the report also found that despite capacity limit of 300 people, daily rosters from the center showed 324 senior citizens along with dozens of staff.

Problems such as missing tiles, peeling paint, dirty toilet and floors, and broken toilets, urinals, and sinks were also found to be common in many of the bathrooms.

“This audit raises serious concerns about the cleanliness and physical conditions of the bathrooms at a number of centers,” said Thompson. “Regular maintenance and upkeep is vital in providing seniors with a clean and sanitary environment. DFTA should work together with the centers and landlords to ensure that all seniors have acceptable bathroom conditions at their centers.”

In a response detailed in the report, the DFTA defended its oversight and stated that contractors hold the responsibility for the upkeep of the senior centers.

“The contract agencies are directly responsible for maintaining these sites and providing services,” said the DFTA in the report. “As such, the Department does not agree with statements such as ‘DFTA did not take action to assist these centers . . . DFTA needs to take more active role in assisting these centers.’ We are concerned about the lack of recognition in your audit report of the providers’ responsibility in maintaining physical conditions of senior centers.”

"The DFTA requires safe and well-maintained senior centers," said the DFTA in an email to the Epoch Times. "The DFTA will continue to work closely with community providers who are responsible for managing the day to day operations of the centers to ensure that facility related issues are corrected in a timely basis."