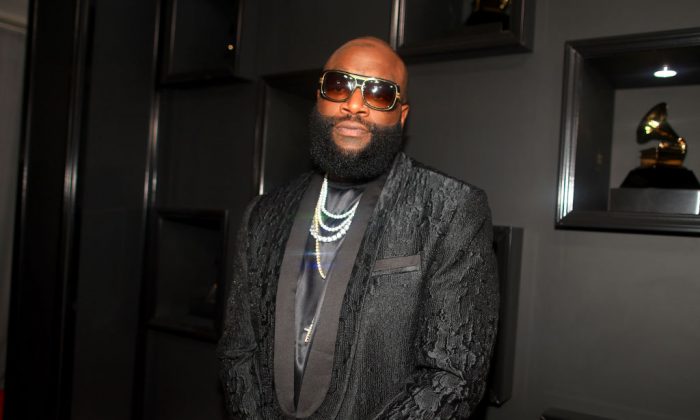 Update at 6 p.m. ET: TMZ, in an update on Friday evening, said that Rick Ross is on life-support. The rapper “has been hooked up to a machine that’s taking over the function of his heart and lungs … according to sources connected to the music mogul,” said the report.

He’s currently in Miami for treatment in the cardiac unit, suggesting that he may have suffered a heart attack.

A 911 caller said that Ross was “slobbing at the mouth” and was unresponsive, TMZ reported.

Billboard reported that he was found unresponsive at his home in Florida. The Davie Police Department of Florida confirmed the health issue to Billboard on Friday.

“We’re told doctors have put him on something called ECMO, or extracorporeal membrane oxygenation. It’s a technique used to oxygenate his blood outside of his body, before it’s pumped back into his body,” the TMZ report stated.

ECMO is essentially a form of life support, as a machine is keeping him alive.

Rapper Rick Ross was rushed to the hospital after being found unresponsive early Thursday morning, March 1.

Ross took ill in Florida at his home near Miami, reported TMZ.

Someone called 911 at 3:30 a.m. on Thursday and said that the person in distress was breathing heavily and unresponsive.

The caller said the man in distress had a history of seizures, which Ross has.

The person in distress then came to and became combative, law enforcement officials told the media outlet.

One person connected to Ross said that he may have pneumonia, although the medical issue could be heart-related.

In 2011, Ross suffered two seizures in less than 24 hours. He recalled in an interview when he saw a doctor soon afterward, reported the Miami New Times.

“’Right now, for you, based on everything you wrote down: sodas,'” the doctor said.

Ross said he would never drink another soda in his life. He’s been drinking fresh juices ever since, according to him.

Rapper, Rick Ross, was taken to the hospital and is said to be having heart related problems or possibly pneumonia. Let's hope it's not serious.https://t.co/baKo4gjhif

Wishing a speedy recovery for Rick Ross, who was recently hospitalized. pic.twitter.com/OjBQn2EUG4

He said he’d gotten a lot healthier since, and lost a lot of weight.

“Before, you would have had to wait an hour for me to just catch my breath, calm down. It’s a big difference,” Ross said.

“And I guess that’s what I was doing it for. I wasn’t doing it for chasing a specific number or no [expletive] like that. It was just trying to live better—live as healthy as I could.”