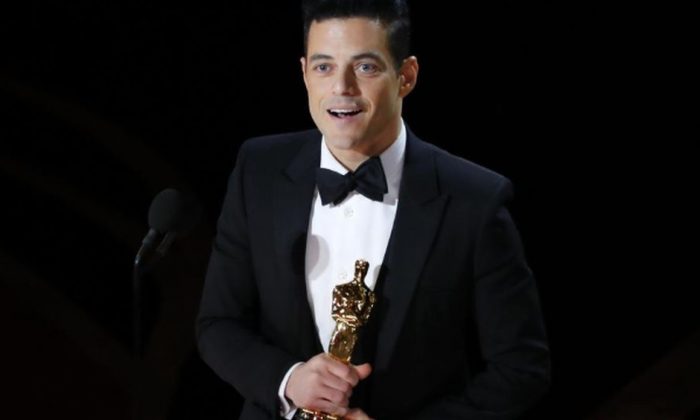 Rami Malek, following his Oscar win for Best Actor, appeared to fall off the stage and was later treated by medics.

He was surrounded by people during the tumble, and photos showed crew and guests trying to help him after the incident.

Rami Malek slipped near the stage shortly after accepting his Oscar for "Bohemian Rhapsody."

The 37-year-old thespian appeared stunned in the wave of the accident as medical professionals treated him in the front row.

During the fall, he managed to keep his Oscar statue aloft.

“As the Dolby Theatre began clearing out, there were whispers backstage that Malek had fallen off the stage. House medics confirmed that the actor—who won for his portrayal of Queen’s frontman, Freddie Mercury—slipped, but did not fall off the stage,” the paper reported.

Malek, 37, had emerged as a favorite for the Oscar in recent weeks after winning Golden Globe, Screen Actors Guild and British BAFTA awards, Reuters noted.

A Los Angeles native of Egyptian descent, Malek took on the role of Mercury, born to ethnic Parsi parents from India who moved their family to England when their son was in his late teens.

The film dramatizes the origins of Queen and Mercury’s personal battles, including drug and alcohol use. In 1991, he was one of the first British celebrities to die from AIDS, at age 45.

Taking the stage to accept his award, Malek drew parallels between his and Mercury’s real-life experiences in coming to grips with their personal identities and finding their voices as artists.

“I am the son of immigrants from Egypt. I’m a first-generation American, and part of my story is being written right now,” he said to applause.

Malek took voice, movement, piano and guitar lessons, and spent months studying archival footage of Mercury to capture his accent, his strutting stage demeanor and the way he commanded a microphone.

“I may not have been the obvious choice (to play Mercury), but I guess it worked out,” Malek told the Oscar audience.

Some said it was like 'Driving Miss Daisy' all over again.

Spike Lee Tries to Walk Out

Director Spike Lee’s film “BlacKkKlansman” was up for the Best Picture award during the Oscars but didn’t get it. The film, “Green Book,” was awarded the prize instead.

Reports said that Lee, who has never won a Best Picture Oscar, appeared to try and storm out of the awards ceremony in Los Angeles.

Lee said the “Green Book” win was like a referee making “the wrong call” during a sports game, Fox News reported.

Spike Lee: “Every time somebody’s driving somebody, I lose.”

According to Deadline Hollywood, Lee got mad and walked to the end of auditorium “in a huff.”

“He then turned back and appeared to get into an intense conversation with Jordan Peele, who was behind him. Lee paced the aisle and stormed to the back of the auditorium,” the website reported.

The longtime director then came back and turned his back during “Green Book’s” acceptance speech. Peele, Lee’s writer in the film, reportedly did the same.

Spike Lee was visibly angry when “Green Book” was announced as the winner of best picture at the Oscars, waving his arms in disgust and appearing to try to storm out of the Dolby Theatre before he was stopped at the doors. He returned to his seat when the speeches were over.