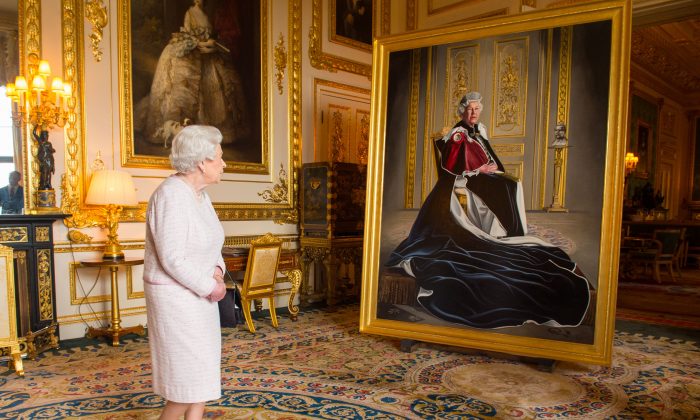 Queen Elizabeth II views a portrait of herself by British artist Henry Ward which has been unveiled at Windsor Castle in Windsor, England, on Oct. 14, 2016, marking six decades of patronage to the British Red Cross. The Queen is the longest-serving patron of the charity, which supports people in crisis in the UK and overseas. (Dominic Lipinski - WPA Pool/Getty Images)
US

Queen Elizabeth II is slated to invite President-elect Donald Trump to the United Kingdom next year, it has been reported.

The Sunday Times reported that the plans to meet with Trump are being concocted in Whitehall, and a formal invitation will be sent out after Inauguration Day on Jan. 20, 2017.

A source close to the issue told the paper: “The government has decided that their secret weapon to get in with Trump is to offer him an early visit to the Queen, him and [his wife] Melania staying at Windsor Castle,” as reported by the Telegraph.

Another cabinet source added to the newspaper: “The Queen is the key here. She’s not a secret weapon, she’s the biggest public weapon you have. Nigel Farage can’t get [Trump] in front of the Queen.”

As a result, U.K. Prime Minister Theresa May will try to take advantage of the meeting to start a free trade deal with the United States, the sources speculated. A visit to the U.K. from Trump could deny the influence of Farage, the architect of the Brexit movement, over the president.

A prime ministry spokeswoman said, “No visit has been organized but the Prime Minister is looking forward to welcoming the president-elect to the UK when he chooses to visit.” Meanwhile, a Buckingham Palace spokesman said, “State visits and other meetings with overseas heads of state are organized on the advice of the Government.”