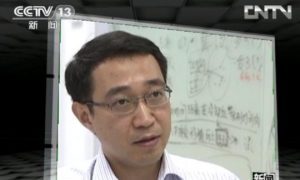 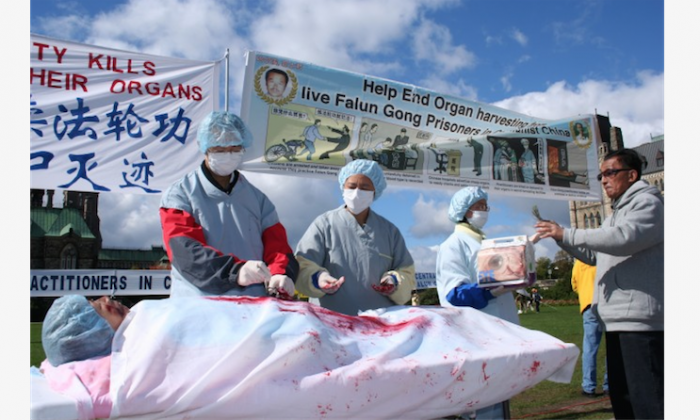 Re-enactment of organ harvesting in China on Falun Gong practitioners, during a rally in Ottawa, Canada, 2008. (Epoch Times)
China

Police across China are bursting into the homes of Falun Gong practitioners and forcing them to give blood samples in order to set up a DNA database, said a report published last week on a human rights website. The police are believed to be doing the testing in order to expand the list of potential donors whose organs may be taken for forced harvesting.

A July 19 article on the Falun Gong-run website Minghui.org lists over 25 incidents, some involving as many as 10 practitioners, in Liaoning, Guizhou, Hebei, and Hunan provinces, as well as in Beijing. These provinces are dispersed geographically, stretching from the far northeast of the country to the southwest.

In a typical incident, Falun Gong practitioners report police breaking into their homes and extracting blood against their will, sometimes forcibly.

An investigation in 2006 into forced organ harvesting from Falun Gong practitioners by international human rights lawyer David Matas and the Canadian M.P. David Kilgour uncovered how practitioners held in labor camps were selected by authorities for the drawing of blood and other tests. Kilgour and Matas’s report was later published as the book Bloody Harvest.

The testing done was consistent with determining someone’s suitability as an organ donor, according to Bloody Harvest. Nonpractitioners held in the camps were not chosen for these expensive tests.

Kilgour and Matas listed this testing as one piece of evidence supporting the conclusion that practitioners detained in China were being used as a live organ bank.

In a phone interview, Matas volunteered that he had never before heard of practitioners who were not in detention having their blood drawn.

“These tests are presumptively for organ harvesting, unless the authorities provide an alternative explanation, which they haven’t done,” Matas said.

Ethan Gutmann, the author of the forthcoming book The Slaughter: Mass Killings, Organ Harvesting, and China’s Secret Solution to Its Dissident Problem (Prometheus Press) had also never heard before of testing done on practitioners not in detention.

Gutmann links the testing to the decision this spring by the Chinese regime not to stop using the organs of executed prisoners. Chinese officials had earlier announced the establishment of a volunteer organ donation system that would take the place of using prisoners’ organs.

“The Chinese medical establishment essentially reneged on all their claims of organ harvesting reform back in March, so the timing appears to fit,” Gutmann wrote in an email. “If Minghui’s information is correct, the situation in China is rapidly deteriorating.”

Matas speculated that this new tactic for gathering practitioners’ data might be linked to the shutdown of the labor camps in China at the end of 2013.

“This is typical of things under communism,” Matas said. “Things change but they don’t get better. They get worse in a different way.”

According to the July 17 Minghui report, officers from a police station in the city of Weining, Guizhou Province, told practitioners the blood samples were being used to set up a DNA database.

In other Minghui reports, practitioners have reported having officers forcibly swab their mouths in order to take DNA samples. In one case, officers went into the home of a practitioner who was missing and collected DNA off of his personal effects.

Gutmann noted that the testing used in China to check organ viability has evolved from extensive medical testing to the use of DNA samples. The testing described by Minghui appears to be consistent with that, he said.

Dr. Mike He, member of the human rights organization Doctors Against Forced Organ Harvesting and a pathologist on the faculty of Brown University Medical School, in an email compared the usefulness of DNA and of cells taken from blood in preparing for organ transplantation:

“DNA testing and cells from blood testing may each be used for determining if a donor is a transplantation match, but each has its limitations. DNA and cells taken from blood samples can be used for HLA [tissue] typing. Blood samples can be used to check the functional status of the donor’s organs, which needs to be done even if compatability has been determined through HLA testing.

“Cell-based testing from blood samples has a relatively low cost, but the typing resolution is lower compared to DNA testing. Also, viable cells are needed. DNA testing has high accuracy and reproducibility, does not need viable cells, and can provide higher resolution, providing information on variations at the level of an individual gene, which is preferred for bone marrow transplant.”

The new testing “Could be just a scare tactic,” Gutmann said. “Practitioners in China are surely aware of the significance of these sorts of tests.”

“The problem is that even if it is a scare tactic, history shows that scare tactics may become reality,” Gutmann said.

“I am reluctant to use phrases such as ‘a final solution’ at this point, but I must confess that’s exactly the hideous phrase that popped into my mind when I read the Minghui report.”

“This is a truly alarming development,” Gutmann said. “The U.S. State Department must respond.”