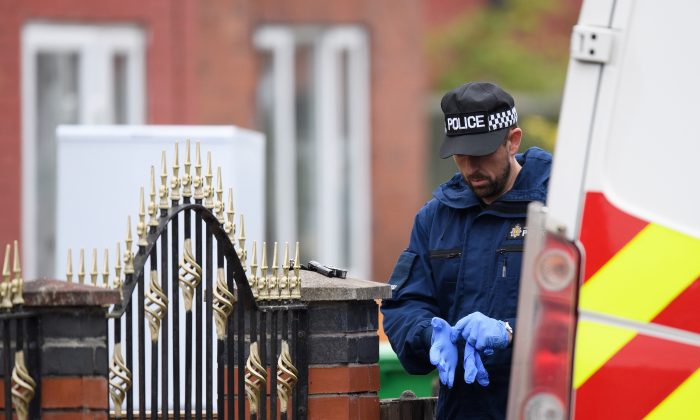 A policeman outside the former home of terrorist Salman Abedi on May 24, 2017 in Manchester, England. (Leon Neal/Getty Images)
UK

LONDON—UK security services missed opportunities to prevent the bombing attack that killed 22 people, including children, at the Ariana Grande concert in Manchester last year, according to a major new report.

The report, by a lawmaker’s security committee, is the latest to criticize Britain’s MI5 intelligence service for shortcomings over four ISIS-inspired terror attacks in 2017 that left 35 dead.

Some of the terrorists were already on an MI5 watchlist that swelled with the growth and collapse of the ISIS terrorist group’s so-called caliphate, as British-born jihadis headed to Syria, then began to return to the UK.

Salman Abedi, the 22-year-old, British-born son of Libyan parents, exploded a suicide bomb in the foyer of a packed concert arena in Manchester as fans, many of them teenagers and children, left a performance by Grande on May 22, 2017.

It was soon disclosed that Abedi, who appears to have been radicalized outside the UK, had previously been dropped from MI5’s radar, returning from Libya just days before the attack.

ISC Chairman Dominic Grieve said in a statement, “What we can say is that there were a number of failures in the handling of Salman Abedi’s case and, while it is impossible to say whether these would have prevented the devastating attack, we have concluded that, as a result of the failings, potential opportunities to prevent it were missed.”

The report noted that MI5 had reviewed its own procedures and learned from some of its failings in the ISIS-inspired attacks in 2017, two of which were knife and vehicle attacks.

The report also highlighted that at the time the system for tracking the purchase of ingredients used to make explosives was “hopelessly out of date.”

Another improvised explosive device was detonated in a packed commuter train at London’s Parsons Green station on Sept. 15, 2017. The device misfired, but caused a fireball that burned 23 people. According to some experts, if it had exploded as intended, it could have killed everyone in the carriage.

The bomb-maker, Ahmed Hassan, had revealed in an earlier asylum interview that he had been taken by the ISIS caliphate and trained to kill, but hadn’t been investigated by MI5.

The committee report said there were “fundamental failings” in the handling of this case by authorities, who had failed to provide full evidence in sufficient time, despite multiple requests.

Earlier this year, Interior Minister Sajid Javid said that 25 Islamic extremist plots had been foiled in the past five years, with 500 live operations and 20,000 people on an MI5 watchlist.

MI5 director Andrew Parker said in May 2018 that 12 Islamic terror attacks had been thwarted in just 14 months.

The UK has some of the most pervasive surveillance powers in the Western world and a controversial de-radicalization program that requires some 400,000 front-line staff to report those who show signs of extremism.

Hassan had been referred to the radicalization program a year and a half before he set off his train bomb. A panel had met nine times to discuss him, and was considering closing his case at the time of the attack.